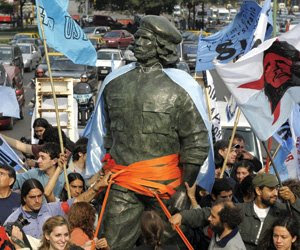 RUSSIA AND IRAQ TORE DOWN THEIR STATUES OF THEIR TYRANTS AND MASS MURDERERS - LENIN, STALIN AND SADDAM...

BUT ARGENTINA IS JUST UNVEILING A NEW ONE!

A bronze statue of Ernesto "Che" Guevara was unveiled on Saturday in the Argentine city where he was born exactly 80 years ago, the first such monument to the revolutionary in his homeland.

Thousands of students, leftist activists and residents marched through Rosario to pay homage to the long-haired guerrilla fighter, who left his country as a young man to lead armed struggles including Cuba's 1959 revolution alongside Fidel Castro.

"I believe in the revolution, that's why I love Che," said Monica Nielson, 49, wearing a soldier's beret with a single star like that worn by Guevara in a photo that turned him into a 20th Century icon.

"El Che," a national hero in Communist Cuba, is one of Argentina's most famous sons. But he has been slow to get recognition as a national figure at home.

For years after CIA-backed troops executed him in the Bolivian jungle in 1967, he was still too controversial for public recognition in Argentina.

... thanks to the donations of more than 14,000 people, among them poets, musicians and scientists, this is about to change with the unveiling of Argentina's first major monument to the popular revolutionary. On 14 June, Guevara's official birth date, a four-metre bronze statue, sculpted by Andres Zerneri, will be unveiled in Rosario, Guevara's birthplace.

I THINK THIS IS MORE PROOF THAT LEFTISTS ARE INSANE.

CHE WAS A BUTCHER WHO PERSONALLY EXECUTED HUNDREDS OF INNOCENT PEOPLE.

MORE ON INSANE OBAMAMANIA AND CHE-MANIA HERE.
Posted by Reliapundit at 7:00 PM