THE ANGER OF BARACK OBAMA 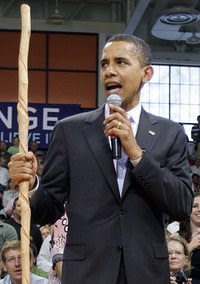 Look at this impromptu bit:

The first thought that comes to his mind, when an elderly gentleman presents him with a lovely hand-carved walking stick, is that he is going to use it to "whup" his colleagues in Congress.

That is just sick.

And then consider his comments regarding Senator McCain's suggestion that the candidates appear in a series of town hall meetings:

"If they bring a knife to the fight, we bring a gun," Obama said at a fundraiser in Philadelphia Friday, according to pool reports.

"We don't have a choice but to win," Obama said, joking that he has heard "folks in Philly like a good brawl. I've seen Eagles games."

Obama has tried to justify his anger as a reaction to what he learned to see as the pervasive racism of American society.

He chose as spiritual mentor a man who made a career out of theatrical expressions of righteous anger. The Reverend Jeremiah Wright expressed openly the emotion that Obama had worked diligently to control and conceal.

However, knowing that (after early childhood years in Indonesia, where obviously he could not have experienced American racism) Obama grew up in a decidedly non-racist environment in Hawaii, I think his anger does not come from American society's racist organization.

The major pain and conflict in Obama's life stems from his father's abandonment of him, when Obama was an infant. His first book was a long meditation on the search for his father, his attempt to come to terms with his father. But since his father is long dead, he can never reconcile with his father face-to-face.

And he would rather attribute the underlying anger of his life to American racism than to the desertion of an alcoholic, communist father.

Analogously, he must have perceived himself to have been abandoned by his communistic mother, when she chose to have her parents raise him in Hawaii, so she could continue her anthropologist's life in Indonesia. And as she is also dead, he cannot reconcile himself with her face-to-face, either.
The humble, self-effacing mask that Obama wears conceals a very different personality. And as he thinks he is getting closer to the Presidency, the ego rush will eventually generate enough psychical energy to overwhelm the mask, and we will see more and more of the real Obama emerge.

the surrogate parents obama adopted in his adult life are all hostile people:

wright; ayers; pfleger; farrakhan... and so on.

this is also his attachment to leftism: it's about TAKING, essentially a hostile act which is only possible via a strong coercive state dictating to individuals and limiting individual liberty.

YES: this is why obama finds leftist politics so emotionally satisfying.

clarnce thomas - whose memoir the left derided as angry - describes this as a PHASE he went through. luckily, clarence made it through this phase.

Comrade Obama is just another jive talking race hustler who happens to be black. Anger is the stock and trade of the Marxist revolution.

So if McCain said he would "whup 'em" what would the media say about that?