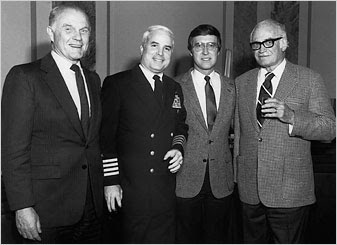 I don't favor him; he's too "centrist" - with a 48% rating from the ACU. But he has his electoral appeal/strengths. Maybe not as many as Tom Ridge - another "centrist" with great creds - and maybe more strength in Ohio and the Mid-West.

My fav' is Jim Demint, but he only strengthens McCain with the base. Pawlenty and Portman are good, but not as well known as Ridge.

If data shows Ridge helps us keep Ohio and win Pennsylvania and perhaps Michigan and Minnesota, then McCain must DO IT.

And we conservatives will have to don gas masks and vote GOP.

BUT I WAS PLANNING ON DOING SO ALREADY - JUST BECAUSE OF THE LIB MCCAIN!
Posted by Reliapundit at 7:19 PM