AN OPEN LETTER TO CHARLES ENDERLIN AND FRANCE2 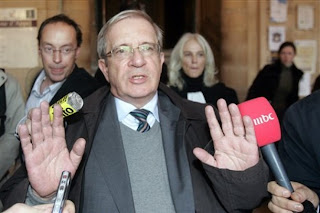 From Breath of the Beast:

Thank You Charles Enderlin and France2-
We have to admit we were angry with you for libeling Israel that we wanted to get you to take it back. It wasn’t just anger. We wanted to make it impossible for you to ever release such a tidal wave of violence and blood on us again.
After the disastrous aftermath of your al Durah report, so many people suffered and died, we have come to think of you more as a war criminal than just an unethical journalist. Really, we do not feel that you deserve to be thought of as an honorable journalist. Fortunately for us your character flaws have relieved us of the responsibility to attack you.
If you had ignored our criticism, let the whole thing drop and not sued anyone you would still be on top of the world today and Israel and the Jewish people would still be blackened by your libel.
Your restless guilt and vanity would not let you do the smart thing, though, and you sued Philipe Karsenty. Only those blinded by self-importance and its underlying insecurity, on the one hand, and driven by a need to deny fault on the other, would have felt the need.
So you showed your weakness and hubris just by filing the suit. Even more important though, from your law suit flowed the healing drama in the French courtroom in March. First, you demeaned yourself by bringing obviously altered tape into evidence into the courtroom. Then you further revealed your self delusion by pretending not to notice the derisive laughter of the gallery or that even the judge who was questioning you was treating you and your evasive explanations with amused disdain.
Now that the judgment is published, Charles, we are very pleased to see that you are going to do your best to help us to help you to complete your self-destruction by taking it to a higher court.
We never had the stomach for the dirty fight you are waging we do not like to destroy other people- no matter how richly deserved. We, therefore are especially grateful to you that you have not had the moral fiber to resist you darker instincts and have thereby undertaken to do the job yourself.
We are not character assassins- but we are enjoying immensely watching your character commit a spectacularly public suicide.
Sincerely,
Yaacov Ben Moshe,
Second Draft
Posted by Pastorius at 12:43 PM