OBAMA: NO COURAGE; NO GUTS; NO PRINCIPLES - AND NO CHANCE AT BECOMING OUR NEXT PRESIDENT 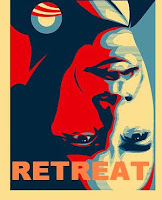 It’s been just over two months since Obama’s Philadelphia speech on race — the one that was compared by the historian Garry Wills to Lincoln’s Cooper Union address. In that speech Obama famously said he could not more disown the Reverend Jeremiah Wright than he could disown the black community or his own grandmother and spoke about how Trinity United “embodies the black community in its entirely.”

Since that speech Wright has been tossed under the bus — and now, so has Trinity United.

THERE'S A PATTERN HERE:
LIKE CARVILLE SAID: "IF HILLARY GAVE OBAMA ONE OF HER COJONES, THEN THEY'D BOTH HAVE TWO."
Posted by Reliapundit at 10:42 PM

OK, a couple of moonbat, hypocrite, so-called preachers spoke out from the pulpit and it might hurt Obama’s chances at the Oval Office, so, the SOB throws em BOTH under the bus for the sake of the campaign…

God forbid he gets elected, but suppose he does, and suppose some asshat like Hugo Chavez criticizes the USA from the podium of the U.N.

Is Obama going to throw the USA under the bus??

I think that’s a fair question myself…

you people are hilarious. i'm a proud lefty and obama pissed me off with his recent FISA vote, so i agree that he doesn't stick to his guns. but pleeeeeeeez, he is not going to join a mosque. that is the most laughable thing i've ever heard of. how ignorant are you people? and hey, some of my best friends are muslims. last i checked this country still had FREEDOM of religion -- one of those freedoms you're obviously not that fond of. some patriot you are. geesh.