CHAVEZ TAKES ANOTHER STEP ON THE CALLE TO SERFDOM: EXPROPRIATES VENEZUELA'S LARGEST STEELMAKER 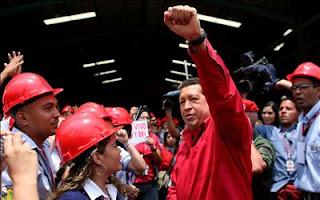 President Hugo Chavez ordered the expropriation of Venezuela's largest steel maker after attempts by the government to acquire a majority stake in the Italian-Argentine conglomerate Techint failed.

Sidor, has been "recuperated by the revolutionary government" said Chavez

Siderurgica del Orinoco, Sidor, has been “recuperated by the revolutionary government” said Chavez during a political rally.

Chavez ordered Sidor nationalized earlier this month, siding with workers who sought improved salaries and benefits. Venezuelan officials had been talking with Ternium representatives (controlled by Techint) to negotiate a price for its 60% share in the company, but the two sides were unable to reach an agreement.

However, the Venezuelan president refused point blank to accept the price tag of 4 billion US dollars claimed by Ternium, calling the amount excessive adding the government had estimated the steel foundry’s total value at about 800 million.

Sidor, a former state company, was privatized in 1998, but the government has retained a 20%, while current and former employees hold the remainder.

The company produces about 85% of the 5 million metric tons of steel Venezuela turns out annually, according to the Belgium-based International Iron and Steel Institute.

IF THIS KIND OF THING WORKED OUT WELL, THEN THE USSR WOULD STILL BE AROUND, AND ZIMBABWE WOULD BE EXPORTING FOOD.

WHEN WILL THEY EVER LEARN?
Posted by Reliapundit at 10:35 PM

Doesn't the word "recuperate" strike you as a bizarre word for theft?

It reminds me of how Muslims calls those who convert "reverts" to Islam.

Both Muslims and Socialists think everyone and everything is their property.

they also think that nature is naturally abundant. as if prosperity grew on trees.

like... the poor africans were once rich until the evilweevilboogiemen colonialists stole everything. as if the first worlkd got wealthy by stealing from the impoverished thrid world.

er um... they sold stuff to the third world! they WORKED to turn raw materials into products people WOULD PAY FOR.

without incentive no wealth is created.

even wild animals must work for their food.

just take it away from a rich guy.