Astonished shop-keepers and passers-by looked on last Saturday as soldiers rounded up Muslims in the Walloon-Brabant city of Nivelles. A protest against the treatment of Muslims in Europe, maybe? 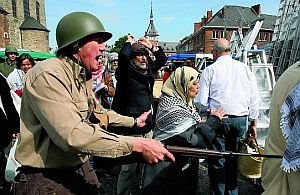 In fact, the street show was an anti-Israel protest, in honor of Nakba Day (Israel's Independence Day as perceived by its enemies). Besides the shallowness and bias of portraying the Israelis as Nazis and the Muslims as the Jews, it seems to me that Belgium should not want to encourage importing foreign conflicts (see here, here and here).

More importantly, the show was put on just a day after Moroccans and football hooligans rioted in the Brussels suburb of Anderlecht, riots which are expected to continue (here and here). Police are facing accusations of racism in their treatment of the rioters. Given the tense situation in Europe at the moment and in Belgium in particular, is putting on street theater displaying the deportation of Muslims really a good idea? After all, shouldn't Belgium be more concerned about its own predicament?

Or is accusing Israel of colonial expansion a way of dealing with the guilt of the Belgian crimes of 60 years ago?

For more info see the European Jewish press (1, 2), and the Western Civilization and Culture blog.

This article was cross-posted to Islam in Europe and to THE ASTUTE BLOGGERS
Posted by Esther at 11:47 AM

No blogspot has decided to spam me on behalf of a blog.

I gave not given blogspot any of my email addresses for the purpose of unsolicited contact.

I am therefore removing your blog from my daily rotation of blogs that I read all that I can identify as blogspot blogs.

I am sorry--I will miss your writing.email address found, so....