THE AUDACITY OF RETREAT 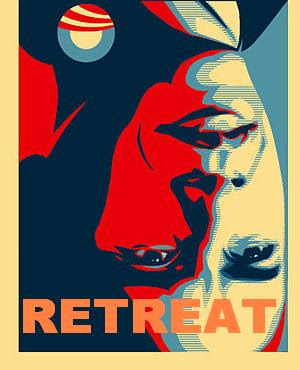 THE SUN HAS SET ON THE OBAMA JUGGERNAUT.

SIMPLE: Not even Obama can toss a whole church under a bus.

I mean... If this church was always this bad (and it was - I mean... NOBODY INSIDE THE CHURCH OBJECTED TO PFLEGER OR WRIGHT AT THE TIME; AT THE TIME, THEY HOOTED SUPPORT!) - then how could he have EVER belonged.

He must have "believed" - and his "campaign conversion" is merely an attempt to save face, and white votes.

And therefore, a failed attempt.

This lefty laments at his flip-flopping:

So in an attempt to turn manufactured right-wing ammo into blanks, Obama has completely separated himself from his minister and his church. What worries me is this: Can we expect a President Obama to cave in to the whims and will of the right on policies and issues he knows are important, if this nation is to move forward in a progressive and compassionate manner? Can we expect him to genuflect to negative reports by an uninformed, misinformed or ill-willed media?

THE LEFT IS ALREADY SEEING OBAMA FOR WHAT HE IS.


20 years too late, but political pressure finally cracks him. It will probably actually cost him votes now, in my opinion.