Rumors of the discovery of the holy grail of Iraq hawks surface once again. I am … how you say? Ah, yes: Skeptical.

An upcoming joint US-Israel report on the September 6 IAF strike on a Syrian facility will claim that former Iraqi president Saddam Hussein transferred weapons of mass destruction to the country, Channel 2 stated Monday.

WE PREVIOUSLY BLOGGED ON THIS - IN RELATION TO THE ISRAELI AIRSTRIKE - HERE AND HERE. 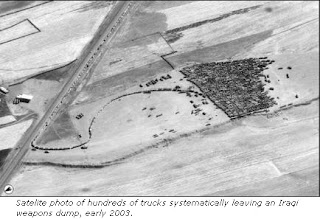 "Those below the senior leadership saw what was coming, and I think they went to extraordinary lengths to [dispose, destroy and disperse] the evidence," said Gen. Clapper.

"By the time that we got to a lot of these facilities...there wasn't that much there to look at. There was clearly an effort to disperse, bury and conceal certain equipment prior to inspections."

Gen. Clapper added that there is "no question" that people and WMD materiel were moved by truck convoys into Syria.

So... they went to Syria. AND WHERE ARE THEY NOW?

MAYBE WE WILL SOON SEE MORE PROOF THEY WENT TO SYRIAN?

That's an interesting photo of vehicles massed together and apparently departing from an area. Where does the photo come from?