Some excerpts from Dr Sanity

I made the mistake of watching some of the testimony of General Petraeus and Ambassador Crocker on Capitol Hill yesterday, with the subsequent questioning by many posturing senators who seemed indifferent to anything the General or the Ambassador might have to say since they were already committed to their own agenda. It was, for the most part, a rather pathetic performance.

I was particularly unimpressed with Presidential candidate/ Senator Obama's questioning which while not confrontative like some of his Democratic colleagues, was significantly underwhelming in its content and direction. The usually slick Obama appeared to be completely out of his depth when not appealing to those abstract concepts of 'hope' and 'change'. Also, he looked nervous and sometimes tongue-tied as he sought to phrase each question in the most politically correct manner. In short, he had absolutely nothing of substance or originality to contribute to the discussion.

All in all, the entire production (except for the information imparted by the General and Ambassador) amounted to a a waste of my time. It was particularly annoying to watch and listen to the antics of the lunatic Code Pink clowns, who have come to symbolize the lack of seriousness with which the left takes national security issues....

Until the Iraqi government decided to finally deal with the issue of Moqtada Al Sadr and his militia (and indirectly with the reality of Iranian interference), the Iraq story had basically dropped off the radar of both the MSM and the Democrats. Because the Surge was working, both realized Iraq had become an issue that could not possibly benefit them and their strategic goal of reclaiming the White House. Hence, the silence was rather deafening as they retreated from their original talking points about the war being lost and were mostly confined to trying to tie the cost of the war into their economic doom and gloom package.

Then along comes Basra and Sadr, and these loyal American 'patriots' nearly wet their pants at the possibility that they could use this violent confrontation to justify their desire to surrender and confirm that the whole enterprise is a HOPELESS QUAGMIRE. For a party that is betting everything on HOPE and CHANGE, their hopelessness about the possibility of defeating Al Qaeda and their lack of interest in the CHANGE in the strategic map of the Middle East is somewhat amazing.

The Democrats and the left live (and die) by polls. Popularity means everything to them. Other people's opinions are the foundation of all their "principled" stands on issues, and you can always count on them to be a weathervane showing which direction the winds of ego gratification blow. It's really too bad for them that external reality is not decided by a poll; nor is it decided by feelings, or pandering to feelings. Their self-induced blindness and utter refusal to acknowledge the realities of Islamic fanaticism and the war on terror in general; as well as the realities of the specific Iraqi theater of that war is truly astonishing.....

For the Democrats and their increasingly histrionic leftist base, denial--not America-- has been their country of residence since September 11, 2001. Generally, it has been a safe and happy place for them to be; because as long as they can hate and vilify George Bush, Dick Cheney, Condi Rice and all those evil Republicans and Lieberman Democrats out there; and as long as they can pretend that the objects of their hate are the real cause of any problem; then they don't have to deal with the external reality of Islamofascist terror, or face the truth about their own unacknowledged and pathological internal reality. They can continue to cling to the holy, neo fascist socialist faith, newly risen from the ashes of the 20th century; and delude themselves into thinking that they are wonderful, caring, loving and reality-based people.

Let's face it, the myths that fuel the left's denial are designed to make sure that they--not America--come out the winners; and that they never have to say they are sorry for enabling the enemies of America and for helping them to kill their fellow Americans. 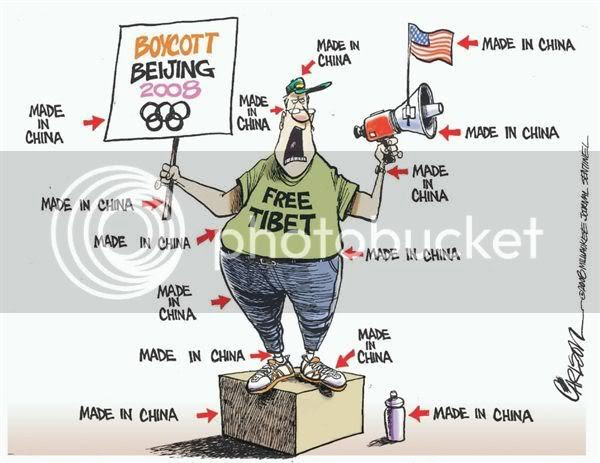 Posted by John Ray. For a daily critique of Leftist activities, see DISSECTING LEFTISM. For a daily survey of Australian politics, see AUSTRALIAN POLITICS Also, don't forget your summary of Obama news and commentary at OBAMA WATCH
Posted by JR at 8:45 AM