WHAT DID OBAMA BELIEVE IN WHEN NOBODY WAS LOOKING? THE PALESTINIANS 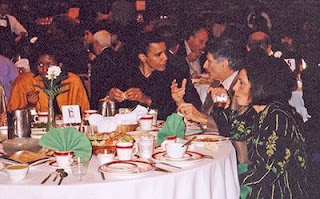 IN 1998 - WHEN NOBODY WAS LOOKING, OBAMA SUPPORTED EDWARD SAID AND THE PALESTINIANS.

HE SAT AT THE RIGHT ARM OF EDDIE AT AN EVENT TO RAISE MONEY FOR PRO-PALESTINIANS AT WHICH SAID GAVE THE KEYNOTE ADDRESS.

[CLICK PHOTO FOR LINK TO POSTING ABOUT B. HUSSEIN OBAMA AND EDDIE SAYEED.]


WHAT OBAMA SAYS NOW - WHILE RUNNING FOR POTUS - CANNOT BE TRUSTED AS MUCH AS THIS PHOTO.

OBAMA HAS A HISTORY OF SUPPORTING THE ARABS AND BEING ANTI-ISRAEL.

AND HE HAS ADMITTED - EVEN BRAGGED - ABOUT HIS ABILITY TO FOOL WHITE PEOPLE.

As he wrote in his memoir, Dreams of My Father, Obama discovered a technique for allaying the suspicions of the white people with whom he came into contact:

It was usually an effective tactic, another one of those tricks I had learned: People were satisfied so long as you were courteous and smiled and made no sudden moves. They were more than satisfied; they were relieved - such a pleasant surprise to find a well-mannered young black man who didn’t seem angry all the time. (Pages 94-95).

ALL OBAMA CAN SAY NOW IS: "WHO ARE YOU GONNA BELIEVE, OBAMESSIAH OR YOUR LYING EYES?"