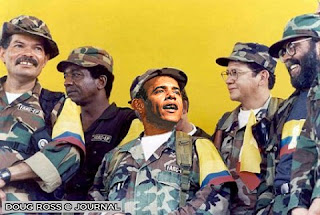 Why is John McCain's non affair front-page news while the appearance of Obama's name on the hard drive of a dead Columbia warlord isn't?

IBD (VIA ROGER KIMBALL OF PJM AND SCOTT JOHNSON OF POWER LINE):

Obama hasn’t said a whole lot about Colombia other than to criticize President Bush’s good relations with President Uribe. With this correspondence suggesting that FARC knows what he thinks, maybe the American voters have a right to know what he thinks, too. Five questions come to mind:

1. Is it true Obama would cut off Plan Colombia military aid to our ally, which would serve the terrorist group FARC’s interests?

2. Does Obama still oppose a free trade agreement for Colombia, even though that puts him on the same side as FARC in the debate?

3. Does Obama know or care that one of his staffers or supporters is claiming to disclose his positions in secret meetings with FARC terrorists outside government channels?

4. Can he tell us why his supporters would pass on such information to terrorists, and what he or she could gain from it?

5. Will Obama, as president, treat FARC as the serious terrorists they are, given that they still hold three Americans hostage?

These aren’t idle “gotcha” questions, by the way. Based on his campaign so far, Obama favors meeting and negotiating with rogue leaders without preconditions, passing secret messages to foreign countries at odds with his public positions and tolerating Che-flag wielding leftists among his supporters who advance a radical agenda in his name.

Now that FARC seems to have an inside line to Obama’s campaign, maybe he ought to come tell voters what he really stands for.

Posted by Reliapundit at 6:15 PM