WILL 70 YEAR OLD MCCAIN GET A MALIGNANT CANCER FOR THE THIRD TIME?

Senator John McCain of Arizona sailed through five and a half hours of surgery for two malignant melanomas today without complications and with no immediate indication that the cancer had spread, his doctors said.
The operation involved removal of two malignant melanomas from his left temple and left upper arm along with lymph nodes from his neck and a portion of his salivary gland.

THE SURGERY IN 2003 WAS A RECURRENCE; HE ALREADY HAD SURGERY FOR MALIGNANT MELANOMA A FEW YEARS BEFORE. 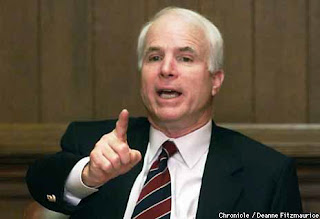 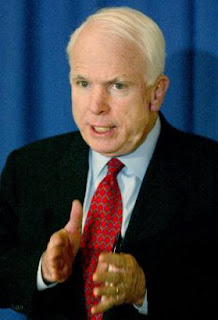 I SUSPECT MCCAIN IS NOT FIT FOR THE OFFICE BASED ON HIS CANCEROUS HISTORY.

I DEMAND HE RELEASE HIS MEDICAL RECORDS AT ONCE.
Posted by Reliapundit at 8:38 PM

Skin cancers and melanomas are the curse of God against white people for their skin sins and continued evil of today. In Daniel, Isaiah and Revelations God warns He will curse the evil with the Sores That Do Not Heal. Skin cancer and melanomas are these sores. Based on their skin color, whites exalted themselves above everyone else on the planet and called everyone else: ugly, evil and inferior. Now, that giving everyone else life burns whites' skin. That giving everyone else life is God. The sun is God. The sun hates white people. God Hates White people. God has fixed His holy light to discriminate between black and whites so that it burns the whites. Ultraviolet light is the fire of the 2nd Rapture burning evil from the earth.

Furthermore, McCain was forced to buy life insurance on himself as collateral for a bank loan to his campaign.

It appears to be the first time ever that's been required of a candidate.

What does that tell us?

We surely don't hear much about these medical facts now, do we?