TWO FROM THE BBC: Clooney made UN peace messenger 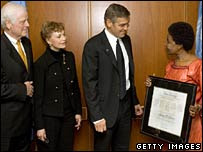 The film star, who will promote the UN's peacekeeping missions around the world, arrived in the city from a trip to the Darfur region of Sudan.

Mr Clooney told the BBC he hoped to be able to help the people he met there who had suffered in the conflict.

Among the eight other peace messengers are actor Michael Douglas and Israeli classical musician Daniel Barenboim.

AND THEN THIS ONE: Senior al-Qaeda commander killed 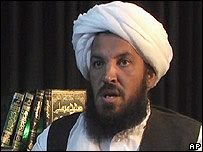 A senior al-Qaeda leader in Afghanistan, Abu Laith al-Libi, has been killed, Western counter-terrorism officials have told the BBC.

News of his death emerged on a website used by Islamist groups. Ekhlaas.org said he had "fallen as a martyr".

There is speculation that he was killed by a US missile strike in the North Waziristan area of Pakistan this week.

He is believed to have behind an attack at an Afghan air base a year ago, while the US vice-president was visiting.

A Pakistani daily paper, the News, reported that the suspected US strike was aimed at Libi and another senior figure, Obaidah al-Masri.