The verdict is in: Earth in midst of widescale global cooling

DailyTech describes the last twelve months have seen a long drop in world temperatures that literally wipes out a century of warming.

Over the past year, anecdotal evidence for a cooling planet has exploded. China has its coldest winter in 100 years. Baghdad sees its first snow in all recorded history. North America has the most snowcover in 50 years, with places like Wisconsin the highest since record-keeping began. Record levels of Antarctic sea ice, record cold in Minnesota, Texas, Florida, Mexico, Australia, Iran, Greece, South Africa, Greenland, Argentina, Chile -- the list goes on and on. 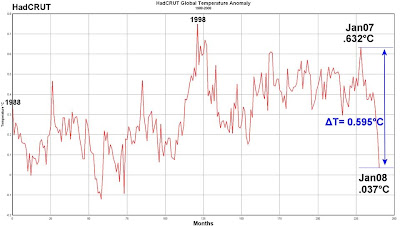 No more than anecdotal evidence, to be sure. But now, that evidence has been supplanted by hard scientific fact. All four major global temperature tracking outlets (Hadley, NASA's GISS, UAH, RSS) have released updated data. All show that over the past year, global temperatures have dropped precipitously.

Meteorologist Anthony Watts compiled the results of all the sources. The total amount of cooling ranges from 0.65C up to 0.75C -- a value large enough to erase nearly all the global warming recorded over the past 100 years. All in one year's time. For all sources, it's the single fastest temperature change ever recorded, either up or down...

Sounds like I need to sell my hybrid and buy a traditional gas-guzzler. My shpringies are getting frostbitten.

And I wonder how long Al Gore's carbon-offset bunko scam is going to last when penguins start freezing to death.
Posted by directorblue at 7:23 PM