UPTURN IN ISLAMISM IN CHECHNYA

The slaughter of teachers and students in Beslan isn't enough to deter the growth of Islamic extremism, according to this article in the Washington Post:

[M]ilitant Islamic ideology is gaining currency in the Russian separatist region of Chechnya and broadening its appeal elsewhere in the tense North Caucasus.

Ousam Baysaev, 43, an author and former journalist who has made a career of chronicling human rights abuses in Chechnya and surrounding republics, presented his conclusions in a lecture in Washington last month at the National Endowment for Democracy. Such findings are likely to cause new anxiety among U.S. and European policymakers already concerned by the unrest in a region strategically important to the United States because of its proximity to Iran, Turkey and Afghanistan.

In his lecture, Baysaev showed a slide of a wall to illustrate the shift from secular to Islamic influence within the separatist movement. One slogan that had been sprayed on the wall graffiti-style read: "Freedom or Death." Beneath it was a more recent one declaring: "Chechnya is the Province of Allah."...

Baysaev puts the blame on poverty and limited opportunities instead of where the blame belongs--on Wahhabist ideology.

The article also notes that being an Islamic terrorist allows for participants to gain status:

"In those republics, there are metastasizing rebel movements," said Miriam Lanskoy, a senior program officer for Central Asia and the Caucasus at the National Endowment for Democracy, who moderated Baysaev's talk. "They come to Chechnya, fight for a week or two, and go home having more credibility and status." 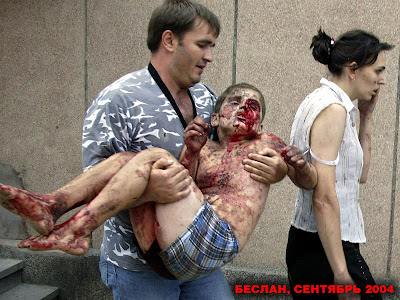 Just how perverted can an ideology be?
Posted by Always On Watch at 6:22 PM