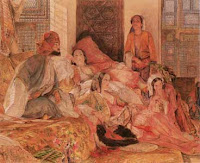 Just how far in the UK willing to go in appeasing Muslims? According to this article in the Telegraph, Muslim polygamy will be recognized, with all "wives" getting full benefit:

Husbands with multiple wives have been given the go-ahead to claim extra welfare benefits following a year-long Government review...

Even though bigamy is a crime in Britain, the decision by ministers means that polygamous marriages can now be recognised formally by the state, so long as the weddings took place in countries where the arrangement is legal.

New guidelines on income support from the Department for Work and Pensions (DWP) state: "Where there is a valid polygamous marriage the claimant and one spouse will be paid the couple rate ... The amount payable for each additional spouse is presently £33.65."

Income support for all of the wives may be paid directly into the husband's bank account, if the family so choose. Under the deal agreed by ministers, a husband with multiple wives may also be eligible for additional housing benefit and council tax benefit to reflect the larger property needed for his family.

The ruling could cost taxpayers millions of pounds....

Shari'a law allows for Muslim men to have a harem of up to four.

So, the UK is going to allow for and fund its own Islmamification by demographics? Not to mention that bigamy has been against UK and Western law for centuries!

As noted by Punditarian here at THE ASTUTE BLOGGERS on Sunday, February 3, in "Britain Capitulates to Polygamists":

[T]he British will surrender the sovereignty of British law within the borders of Britain, and grant cultural extra-territoriality to Muslims. With Muslim areas no-go for infidels, including the police, and the Labour government falling over itself to allow Muslims to govern their lives according to shariah, Britain is rapidly becoming a colonia of the Ummah. How long will it be until British law no longer even holds for infidels?

For well over two years, I have been attempting to catalogue, at least in part, the Islamification of the West. But never in my wildest imagination approaching paranoia did I ever dream that the UK, a country firmly rooted in Judeo-Christianity for the past several centuries, would recognize Muslim polygamy and fund it as well.

Some days, I dread turning on my computer!

Labels: Always On Watch, dhimmitude, islamification, Muslims in the UK