The British government is not set to convince its proletariat that bottled water is "unfashionable."

Drinking bottled water should be made as unfashionable as smoking, according to a government adviser.

"We have to make people think that it's unfashionable just as we have with smoking. We need a similar campaign to convince people that this is wrong," said Tim Lang, the Government's naural resources commissioner.

Phil Woolas, the environment minister, added that the amount of money spent on mineral water "borders on being morally unacceptable".

Their comments come as new research shows that drinking a bottle of water has the same impact on the environment as driving a car for a kilometre. Conservation groups and water providers have started a campaign against the £2 billion industry.

A BBC Panorama documentary, "Bottled Water: Who Needs It?", to be broadcast tomorrow says that in terms of production, a litre bottle of Evian or Volvic generates up to 600 times more CO2 than a litre of tap water. 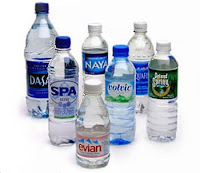 This reminds me of Nineteen Eighty-Four where one year the media tells the people that Oceania is at war with Eurasia, and the next year Eastasia is the enemy.

Either way, the message is, human beings destroy the Earth by the very fact of their existence. Gaia, mother Earth, is threatened by humans, who are merely an unnatural blight upon her body, an unwanted organism in the ecosphere, a bit of tissue it would be better to abort.

When I was four years old, I remember being in church and hearing the Minister say, "The people were worshiping stones and trees." I thought that was the most absurd thing I had ever heard. Worship rocks? WTF?

But, now I am an adult and I see that, all around me, people are worshiping mother Earth. Paganism did not die. It became the environmental movement.

"Drinking bottled water should be made as unfashionable as smoking, according to a government adviser.

"We have to make people think that it's unfashionable just as we have with smoking. We need a similar campaign to convince people that this is wrong," said Tim Lang, the Government's naural resources commissioner."

WELL: It may be "UNFASHIONABLE" to smoke... NOW, but it might be even worse - if the left gets its way: These left-wing wackos/paganists/eco-nutsies in the UK actually want to require a license for smoking.

And they think drinking bottled water is just as bad.

IS THERE ANY PART OF OUR PRIVATE LIVES OR ANY PART OF THE FREEMARKET THEY DON'T THINK THEY HAVE A RIGHT TO CONTROL!? No, there is not. Sheesh.

Liberals are destroying our environment with their bottled water. Our oceans are being choked to death by discarded Liberal plastics (And you cannot compare their deadly refuse with my recyclable beer cans and bottles.).

Liberals have pushed our Mother Earth to the brink.........we must fight back.

I think we should me a deal with the environmentalists. We will agree to a ban on plastic bottles if they agree to support our legislation to deport islamofascists. something for everyone!

Hmmmm...How's this; For every bottle of water sold, the purchaser must ID at least one Islamofascist and support his or it's deportation, to be paid for by the bottling company.

these earth-worshiping libs won't be happy until humans are extinct.

i say: you first!

Felix and Michael,
I love the trade-off idea. That is great. Thanks.