"INDIAN AMERICANS" AT THE DNC

Among those Indian Americans chosen for a prominent role at the DNC is Iman Malik Mujahid, who according to India West, will sit on the DNC's selection committee and play a role in selecting delegates and alternates. Mujahid, which means "warrior" and derives from the same Arabic root as "jihad," is the founder and director of the Sound Vision Foundation. According to Sound Vision's web site, Iman Malik Mujahid

is the President and Director of Sound Vision Foundation Inc. He is an Imam in the Chicago area. A graduate of Darul Uloom Shah Waliullah in Islamic Studies and the University of Chicago in Political Science, he has learned television production as director and producer at the Chicago Access Corporation. He is the producer of Sound Vision's programs.... 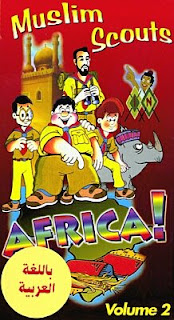 The above sounds innocuous enough, and one might assume that Mujahid is a public-relations specialist for the media. He probably is such a specialist.

But is he also something else?

According to this article ("Sound Vision = Fun with Fundamentalism for Kids : 'To acheive the best of this world and of the world to come'") at Militant Islam Monitor, Sound Vision specializes in certain kinds of materials with a special agenda:

The videos and vacation tips below are a few examples of how the Islamist 'parallel universe' is being marketed today and begs the question as to how a generation of children raised on the concept of 'life in the world to come' , who are being taught that "Animals are Muslims too " will react as adults when they come face to face with the infidel manifestations of humanity who refuse to "revert" to Islam.

The poster above which shows the September 11th attacks on New York, with the caption "America and American Muslims Under Attack" answers this question and reveals that for Islamists, only Muslims,( or potential converts), fall under the category of 'humanity'....

Some choice for the DNC, huh?