FARRAKHAN ALL BUT ENDORSES OBAMA AND HAILS HIM AS THE SAVIOR

IF THIS DOESN'T SCARE YOU, NOTHIN' WILL: 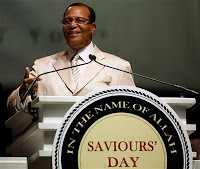 In his first major public address since a cancer crisis, Nation of Islam Minister Louis Farrakhan said Sunday that presidential candidate Barack Obama is the "hope of the entire world" that the U.S. will change for the better.

The 74-year-old Farrakhan, addressing an estimated crowd of 20,000 people at the annual Saviours' Day celebration, never outrightly endorsed Obama but spent most of the nearly two-hour speech praising the Illinois senator.

[NOTE: In the photo, on the podium it says: IN THE NAME OF ALLAH."]

"This young man is the hope of the entire world that America will change and be made better," he said.

"This young man is capturing audiences of black and brown and red and yellow. If you look at Barack Obama's audiences and look at the effect of his words, those people are being transformed."

Farrakhan compared Obama to the religion's founder, Fard Muhammad, who also had a white mother and black father.

*******UPDATE: GATEWAY HAS MORE - INCLUDING AN INCREDIBLE JPEG/PHOTOSHOP, AND SEVERAL LINKS AND SOME VERY VERY INTERESTING DOT CONNECTING...
Posted by Reliapundit at 10:14 PM

Will the MSM give this even a mention?