Cable provider Comcast was recently caught throttling consumer file-sharing using an approach that some have called a "denial-of-service" attack. In other words, Comcast specifically squelched legal, online video sharing. Technology experts, including those involved in the creation of the Internet (no, not you, Al Gore) strongly oppose Comcast's tactics. 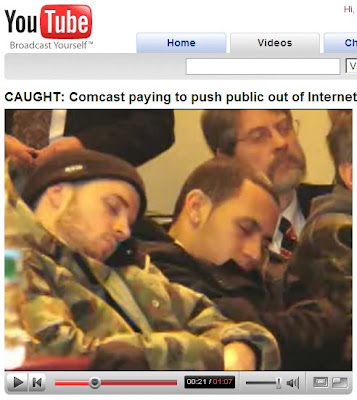 When the Beltway Insiders Club known as the FCC reluctantly got involved, it held a public hearing. But rather than allow public debate, Comcast paid uninterested observers to fill the room. The general public, which had arrived 90 minutes ahead of time, was unable to attend the meeting.

Watch the video, then go to Save the Internet and make your voice heard.
Posted by directorblue at 9:27 PM