DOES "LOOSE CANNON" MCCAIN HAVE THE TEMPERAMENT TO BE A WAR-TIME PRESIDENT?

McCain's anger is legendary. Many have said he has real anger management issues. 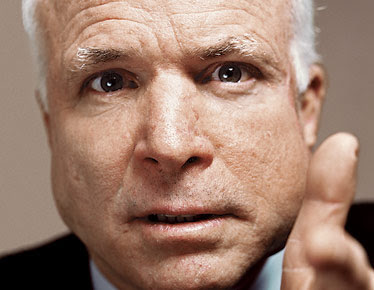 HERE are a few examples:

Referring to the Republican front-runner for president, Card said, "Sometimes he was pretty angry, but I felt as if he was putting on a show. I don't know if it was an emotional eruption or for effect."

In a July 5 NewsMax.com article, former Senator Bob Smith, a New Hampshire Republican who served with McCain on the Senate Armed Services Committee, said, "I have witnessed incidents where he has used profanity at colleagues and exploded at colleagues.... He would disagree about something and then explode.

"It was incidents of irrational behavior. We've all had incidents where we have gotten angry, but I've never seen anyone act like that."

It is often been directed at his fellow GOP Senators; (he told Senator Sornyn to fu**off during the amnesty negotiations).

But sometimes he has directed it against the gullible public, whom - with the liberals air of superiority - he has often snidely derided.

Sometimes he's directed it at Cabinet members. Like Rumsfeld - who served well, and nobly.

But never at those patriotic folks in the MSM. That wouldn't serve his ego.

(And the liberal MSM loves him right back; for example: Have you ever noticed how he is NEVER photographed from the left!? OF COURSE NOT: It would show his cancer-surgery scars! The MSM would NEVER want you to be reminded of the fact that he has had repeated skin cancer surgeries.)
Do we really want an egomaniac with anger-management issues as Commander in Chief.