CHAVEZ IS A FLOP:

IHT: Failure to free hostages a fresh defeat for Chávez 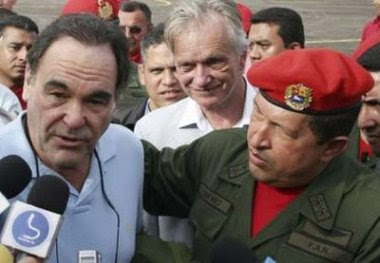 RIO DE JANEIRO: Last week, the Venezuelan president, Hugo Chávez, seemed on the verge of one of his biggest triumphs to date.

Now, amid renewed acrimony with the Colombian leader, Alvaro Uribe, he is staring at his second major political defeat in little more than a month.

Using his credibility as a former rebel leader, Chávez orchestrated a plan to release three hostages being held for years in the jungle by a Colombian guerrilla group, the Revolutionary Armed Forces of Colombia, known as the FARC.

Bristling with confidence, he assembled his allies in Latin America, including a former Argentine president, Nestor Kirchner, to witness a breakthrough in the decades-old conflict between the Colombian government and the FARC.

The movie director Oliver Stone was part of a multinational group of observers that included diplomats from seven countries. Then on Monday, Chávez's showman moment seemed to turn from history-making success into his latest failure.

For reasons that remain unclear, the FARC refused for four days to give the exact location of the hostages to Venezuelan helicopter pilots. Chávez read a letter from the rebel group late Monday that said the promised security conditions had not been met.

"This is an important defeat for Hugo Chávez's regional agenda to promote his Bolivian revolution and utilize his contacts with armed groups to win political influence," said Román Ortiz, the director of security for the Ideas for Peace Foundation, a Bogotá research institute focused on Colombia's armed conflict.

THE EGOMANIAC MARXIST FLOPPED. I HOPE THAT HOLLYWOOD RED WITH THE BROWN-NOSE, OLIVER STONE, GOT IT ALL ON FILM!
CHAVEZ IS ALSO FLOPPING ON THE HOME-FRONT; BUSINESS WEEK/AP: Venezuelan inflation leads region

BUT THAT'S NOT ALL! NOT ONLY IS CHAVEZ EXPORTING MAYHEM AND IMPORTING INFLATIONS; HE'S EXPORTING ILLEGAL DRUGS TO SPAIN; EL UNIVERSAL: 80 percent of incoming cocaine in Spain goes trough Venezuela

Anti-narcotic intelligence services, such as the US Drug Enforcement Administration (DEA) are on the alert because 80 percent of the cocaine arriving in Spain comes from Venezuela, reported Spanish daily newspaper La Razón on its Monday edition.

The ships loaded with illicit drugs that have been interdicted since 2003 passed through Venezuela.

This is the case of Poseidon, containing three tons of coca; Caridad C, containing an equal amount; White Sands, containing 3,100 kilograms, and most recently, Fabio Gallipolli, which was intercepted in Cape Verde waters.

For its part, DEA claimed that the Venezuelan army sells weapons to the Colombian Revolutionary Armed Forces (FARC), provides them with forged passports and even escorts air and sea cargos.

The same sources noted that the illicit drugs from Venezuela to Europe and Mexico increased about 500 percent under the government of President Hugo Chávez. According to La Razón, quoting Colombian intelligence sources, there are 117 clandestine airstrips in Venezuela for drug-related activities.


THEY DON'T COME ANY WORSE.
Posted by Reliapundit at 5:19 PM