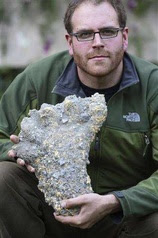 A U.S.-based television channel investigating the existence of the legendary Yeti in Nepal has found footprints similar to those said to be that of the abominable snowman, the company said on Friday.

A team of nine producers from Destination Truth, armed with infrared cameras, spent a week in the icy Khumbu region where Mount Everest is located and found the footprints on the bank of Manju river at a height of 2,850 metres (9,350 feet).

One of the three footprints discovered on Wednesday is about one foot long, or is of similar size and appearance as shown in sketches of the mystical ape-like creature believed to live in snowy caves, the TV company said.

"It is very very similar," Josh Gates, host of the weekly travel adventure television series, told Reuters in Kathmandu after returning from the mountain. "I don't believe it to be (that of) a bear. It is something of a mystery for us," said Gates, 30, an archaeologist by training.

Tales by sherpa porters and guides about the wild and hairy creatures lurking in the Himalayas have seized the imagination of foreign mountain climbers going to Mount Everest since the 1920s.

WHEN THEY FIND THE YETI, MAYBE THEY CAN ASK HIM IF HE BELIEVES IN KUCINICH'S FLYING SAUCER, AND RATHER'S TANG MEMOS.
Posted by Reliapundit at 12:32 AM