WHAT HAPPENS WHEN YOU DISARM THE CITIZENRY AND THE COPS? GUN CRIME GOES UP!

THE UK HAS VERY STRICT GUN CONTROL LAWS AND NOT EVERY COP IS ARMED. 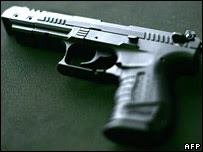 Armed police numbers have dropped despite a rise in gun crime, the Conservatives have said.

The fall in numbers has been most serious in "hotspot" areas with the biggest rises in offences, figures obtained by the Tories suggest.

For instance, in Northamptonshire, gun offences tripled in 10 years - but the number of armed officers fell by 56%.

'Part of the problem'

The armed police figures were obtained by the Tories after parliamentary questions.

In Avon and Somerset, the number of armed officers dropped from 165 to 117 in the same period, while reported gun offences went up 62%.

IF THE BRITS WANT TO LOWER GUN CRIME THEY SHOULD ENCOURAGE LAW-ABIDING CITIZENS TO GET GUNS, AND ARM EVERY COP.
Posted by Reliapundit at 7:36 PM

In Victorian and Edwardian Britain, most upstanding gentlemen routinely carried a revolver, including doctors and clergymen. This is well documented in contemporary literature and memoirs from the period. Joyce Lee Malcolm has also written several books and many articles on the folly of Britain's disarmament policies. See here: http://www.reason.com/news/show/28582.html

"The illusion that the English government had protected its citizens by disarming them seemed credible because few realized the country had an astonishingly low level of armed crime even before guns were restricted. A government study for the years 1890-92, for example, found only three handgun homicides, an average of one a year, in a population of 30 million. In 1904 there were only four armed robberies in London, then the largest city in the world. A hundred years and many gun laws later, the BBC reported that England's firearms restrictions "seem to have had little impact in the criminal underworld." Guns are virtually outlawed, and, as the old slogan predicted, only outlaws have guns. Worse, they are increasingly ready to use them. Nearly five centuries of growing civility ended in 1954. Violent crime has been climbing ever since. Last December, London's Evening Standard reported that armed crime, with banned handguns the weapon of choice, was "rocketing." In the two years following the 1997 handgun ban, the use of handguns in crime rose by 40 percent, and the upward trend has continued. From April to November 2001, the number of people robbed at gunpoint in London rose 53 percent."