THE RELIGION OF FORCED MARRIAGE OF LITTLE GIRLS

ISLAM IS THE PROBLEM.

NOT ALL MUSLIMS, BUT ISLAM.

HERE'S A LINK TO ARTICLE ON ISLAM'S ENFORCED PEDOPHILA. EXCERPT:

In many Western and Muslim countries what happened to Hadjo would be called paedophilia and the male attacker would be arrested and imprisoned.

In Niger that word is only applied to men who have sex with girls outside of marriage, said Idrissa Djibrilla, head of the Niger branch of Defence for Children International (DCI), a non-governmental organisation (NGO).

"Here we only talk about paedophilia when sex happens outside marriage," Djibrilla said.

"If we look at it from the biological, physiological point of view, it's clear that at nine, 10, 11 or 12 years old a girl simply is not ready for sex and child bearing. That's the reality, but it is hard to make our communities understand."

The effects can be long-lasting and extend beyond physical health, human rights workers and psychologists who have studied child brides say.

Forced sexual intercourse, denial of freedom and domestic violence are "frequently" found in child marriages, the long-term effects of which are poorly understood, according to a confidential NGO study shown to IRIN.

Eventually, the girls are likely to be abandoned when their polygamous husbands take another young bride. In Niger, women have little or no rights after a divorce.

Hadjo's case is not an isolated one in Niger. The problem affects all the regions of the country, Djibrilla said. At least a third of girls are married by the age of 15, and 75 percent before the age of 18, according to the UN Population Fund (UNFPA).

In reality, activists say 13 is a common age for marriage, and some girls are married off as young as nine or 10. They will be forced to have sex even before their first period. 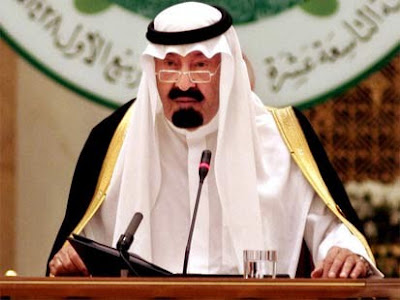 AND HERE'S A PICTURE OF THE KING OF THE HOUSE OF SAUD - THE DEFENDER OF MECCA AND MEDINA - RECENTLY PARDONING AN GANG-RAPE VICTIM.


THE WEST COULD DRAIN THE SWAMP IN WHICH JIHADO-TERROR BREEDS BY ERADICATING ISLAMO-MISOGYNY.

WE ENDED SLAVERY. WE CAN END THIS BARBARIC PRACTICE, TOO.

Posted by Reliapundit at 7:17 PM