Claws for concern in Germany:

By the time she had realised her mistake - that as one of Germany’s top communists she should probably not be seen eating lobster - it was too late. There was no time to switch from the £16 “rich man’s dish” to a more modest platter of kippers, because Sahra Wagenknecht had already been caught on camera in the act of betraying her own political ideals. Comrade Wagenknecht’s response?

She directed an assistant to secure the camera, then erased the shameful lobster images. 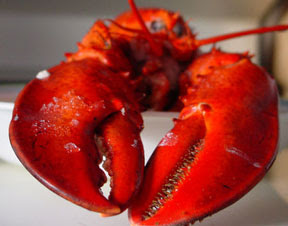 Actually, lobster the perfect symbol for today's postmodern left: it's red on outside and white inside, it's filled with gooey green stuff, and has big claws (the to better take away your stuff!).

ALSO: It takes a nutcracker to open one up, and they taste best boiled alive and eaten with melted butter. (OKAY I'M GETTING CARRIED AWAY!)
Posted by Reliapundit at 6:49 PM