Rush Limbaugh was fooled today by a slick, professional and plausible global warming scam. In effect, it was a false flag operation designed to perpetrate a hoax, thereby positioning Limbaugh as a gullible fraud.

James Lewis at the American Thinker:

The hoax looks very professional. A fraudulent scientific journal was created on the web, called the "Journal of Geoclimatic Studies."  The journal is fake, the article claiming to disprove the popular Global Warming meme is fake, the Editorial Board is fake, and the authors are faked.

The key to this fraud is its professionalism. All the visible features of the hoax are superficially possible. They do not stand up to deeper examination, but the hoaxers succeeded in fooling Rush for some minutes before he caught it.... We have previously warned about likely Black PR in the blogosphere. It is possible that others have been planted.  We will undoubtedly see other Black PR ops as the election season heats up.

First off, let's call 'em blog ops. Secondly, the positive side of this story was the link I discovered to Dr. Roy Spencer at WeatherQuestions.com.

...globally averaged temperatures are unusually warm today (at this writing, 2007). While a majority of climate researchers believe that this warmth is mostly (or completely) due to the activities of mankind, this is as much a statement of faith as it is of science. For in order to come to such a conclusion, we would need to know how much of the temperature increase we've seen since the 1800's is natural. So, let's examine current temperatures in their historical context. Over the last 100 years or so globally-averaged surface temperature trends have exhibited three distinct phases.

The warming up until 1940 represents the end of the multi-century cool period known as the "Little Ice Age", a particularly harsh period for humanity. This warming must have been natural because mankind had not yet emitted substantial amounts of greenhouse gases. Then, the slight cooling between 1940 and the 1970's occurred in spite of rapid increases in manmade greenhouse gas emissions. One theory is that this cooling is manmade -- from particulate pollution...

At least in the context of the last century or more, today's global temperatures are unusually warm. But when was the last time that the Earth was this warm?. You might have heard claims in the news that we are warmer now than anytime in the last 1,000 years. This claim is based upon the "Hockey Stick" temperature curve, which used temperature 'proxies', mostly tree rings, to reconstruct a multi-century temperature record. That "warmest in 1,000 years" claim lost much of its support, however, when a National Acadamy of Science review panel concluded in 2006 that the most that can be said with any confidence is that the Earth is warmer now than anytime in the last 400 years. Note that this is a good thing, since most of those 400 years occurred during the Little ice Age.

...we see that substantial natural variations in temperature can, and do, occur -- which should be no surprise. So, is it possible that much of the warming we have seen since the 1970's is due to natural processes that we do not yet fully understand? I believe so. To believe that all of today's warmth can be blamed on manmade pollution is a statement of faith that assumes the role of natural variations in the climate system is small or nonexistent.

The fact is, science doesn't understand why these natural climate variations occur, and can not reliably distinguish between natural and possible human influences on global temperatures. So, if scientists have no other natural explanation for a warming trend, they tend to assume that it is manmade. And it is indeed possible to explain the temperature changes over the last 100 years by carefully tuning climate models with some estimated effects from volcanic eruptions, sunlight intensity variations, manmade aerosol emissions, and greenhouse gas increases. But this is simply one possible explanation -- one that ignores or minimizes any natural sources of temperature variability... 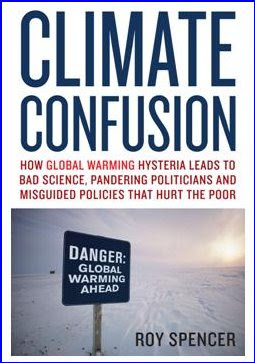 I believe that this is incorrect.

It is now reasonably certain that changes in solar radiation cause temperature changes on Earth. For instance, the 1991 eruption of Mt. Pinatubo caused a 2% to 4% reduction in sunlight, resulting in two years of below normal temperatures, especially over Northern Hemisphere land areas.

But the Earth's natural greenhouse effect (again, mostly from water vapor and clouds) is under the control of weather systems -- especially precipitation systems -- which are generated in response to solar heating. Either directly or indirectly, those precipitation systems determine the moisture (water vapor and cloud) characteristics for most of the rest of the atmosphere.

Read the whole thing and be sure to forward it to your liberal progressive friends.

Sorry, I keep doing that. I keep forgetting that the left is trying to escape its horrifically failed, liberal past through a careful rebranding effort. My sincere apologies to the liberals progressives.

Cross-posted at Doug Ross @ Journal
Posted by directorblue at 9:53 PM