MORE BAD NEWS FOR THE DEMOCRATS: RETAIL SO FAR IS GRRRREAT! 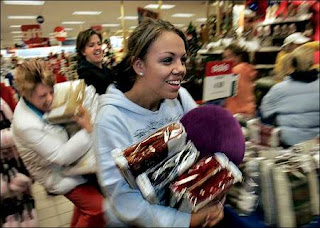 The nation's retailers had a robust start to the holiday shopping season, according to results announced Saturday by a national research group that tracks sales at retail outlets across the country.

According to ShopperTrak RCT Corp., which tracks sales at more than 50,000 retail outlets, total sales rose 8.3 percent to about $10.3 billion on Friday, the day after Thanksgiving, compared with $9.5 billion on the same day a year ago. ShopperTrak had expected an increase of no more than 4 percent to 5 percent. 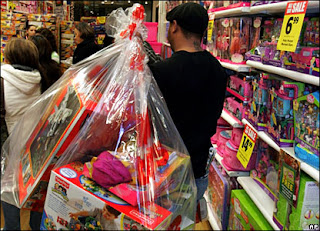 "This is a really strong number. ... You can't have a good season unless it starts well," said Bill Martin, co-founder of ShopperTrak, citing strength across all regions. "It's very encouraging.

When you look at September and October, shoppers weren't in the stores."

THIS IS REALLY BAD FOR THE DEMOCRATS.


GEE: D'YA THINK MAYBE THE DEMS ARE WRONG ABOUT EVERYTHING?

Update: Yes, we had this item a full day before Instapundit and Captain's Quarters. We lead; we don't follow the pack. Spread the word!

Posted by Reliapundit at 5:10 PM