HOW THE REPUBLICAN RACE IS SHAPING UP! 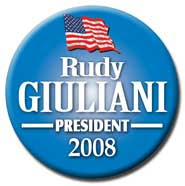 For me, it has come down to Rudy and Fred for the Republican nomination. A recent Missouri Poll shows that Missouri Republicans are favoring Rudy first with 21% and then Romney (17%) and Fred (16%) virtually tied for second. We get to vote on Super Tuesday so it will be interesting to see how things will look by then.

It is likely that McCain and Huckabee will have to drop out before Super Tuesday and it will be interesting to see who they will endorse and who their supporters will turn to. It is looking like it will come down to Rudy vs. Romney and if thats the choice then it will be Rudy for me. I've done much thinking, seeking wise counsel and praying and I am convinced that Rudy is the best option if it comes down to him and Romney.

I'm not that concerned about the Huckster because even if he does win Iowa he doesn't have a plan or much of a chance of winning anything after that. I view it as a good thing for him to win Iowa because then it may take some of the steam out of Romney's campaign.

Other related articles and posts:
The Two-Man Republican Race
Steve talks about the latest New Hampshire Polls
Proof Rudy Made a Huge Difference
Posted by Dionne at 2:14 AM