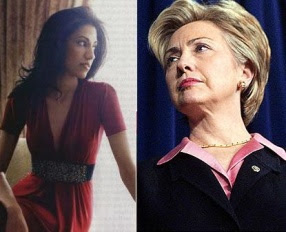 1) WELLESLEY IS A WELL-KNOWN HOT-BED OF SAPPHITISM. (MORE HERE.)
WELLESLEY IS WHERE HILLARY WENT TO COLLEGE.

Wellesley, Mass., Nov. 1—Hillary Clinton reached out to young women voters in an emotional return today to her alma mater, Wellesley College, where she said that “in so many ways, this all-women’s college prepared me to compete in the all-boys’ club of presidential politics.”

MAYBE IT SHOULD JUST READ: "REACHED OUT TO YOUNG WOMEN..."?

WHY DO I SAY THAT? BECAUSE OF STUFF LIKE THIS:

3) BIG HEAD DC HAS THE JPEGS AND THE LINKS TO SEVERAL STORIES/RUMORS ABOUT HILLARY AND HER OMNIPRESENT "TRAVELING CHIEF OF STAFF" HUMA ABEDIN. EXCERPT:

We’re still a bit incredulous on this one, but a top level U.S. Department of Justice official is telling Big Head DC that Michael Musto’s rumor about Hillary Clinton fooling around with one of her top female aides Huma Abedin is based in reality!

“If you call Hillary’s residence in DC first thing in the morning, Huma answers the phone,” the official continues. “Same thing late at night and on the road. It’s a closely guarded secret that Hillary’s inner circle guards at all costs.”

Make of that what you will, kids. But know this: The official is someone who has proven highly credible in the past.

MAYBE THIS IS THE STORY THAT RON ROSENBAUM SAYS THE LA TIMES IS COVERING UP?

THE BOSTON HERALD HAD A CLEVER TITLE FOR THEIR ARTICLE ON HILLARY'S VISIT:

Wellesley women line up for Clinton

WILL HUMA BE JEALOUS?
Posted by Reliapundit at 8:41 PM