WHY IS THE MSM EMBARGOING THE NEWS THAT THE ANTARCTIC ICE SHELF IS THE BIGGEST IT'S EVER BEEN?

COULD IT BE BECAUSE IT DISPROVES GLOBAL WARMING?
GOOGLE "ANTARCTIC" AT GOOGLE NEWS AND YOU GET ZERO STORIES ABOUT THIS: 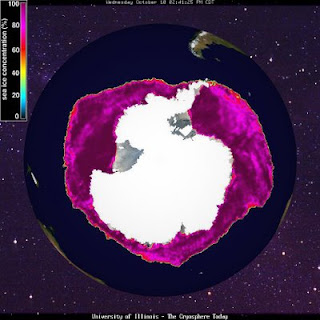 It's an important bit of news most people are hearing NOTHING about. And when they do, it opens their eyes. CASE IN POINT: While discussing Gore's prize, I got the better of a Leftie the other day: I told her that polution is bad - and that there are a dozen reasons why we should diversify our energy sources and use alternatives to so-called fossil fuels, but that AGW caused by CO2 was NOT one of them. When I showed her this news about the Antarctic she was speechless.

Her silence gave me the opportunity to explain to her that (a) CO2 was a small part of the atmosphere, that (b) man-made CO2 was an even smaller part, that (c) CO2 is a poor conductor, and that (d) ice cores show it's a lagging indicator and not a cause of warming. I reminded her that Long Island was formed when glaciers retreated and that climate change is and has always been natural and periodic.

SHE WAS SPEECHLESS. I'd cracked an opening in the Leftist wall of lies and let a ray of light in.

.
Great job with the Leftie, bravo! The CNN Meteorologist saying that the Man-Made Climate Change theory is "Arrogant" is a great advancement in the cause of educating the masses with the truth. Hopefully more of the MSM will start speaking out. The word is spreading, tell all your friends and family, and tell them to do the same.

Gore and his Man-Bear-Pig. The politicians on board with this scam must be simply out of their minds.
For one thing, there’s plenty of oil and NG, we just need to drill for it and refine it. Also expand and improve nuclear, wind, hydro, solar and hemp fuel.

Can’t anybody talk some sense into Gore, McCain, Bush and Obama about how temperatures rise first, and THEN carbon-dioxide levels rise.
Carbon-dioxide doesn’t cause warming, sun activity does, warming causes CO2 levels to rise.
.
absurd thought -
God of the Universe says
humans’ breath is poison

just one child hurts the world
worse than a jet engine

put an end to all debate
silence all your critics

.
absurd thought -
God of the Universe says
keep people all worked up