WEEKEND WITH THE ARTS: DRUMS OF PASSION: OLATUNJI!

There's more to life than war, taxes and politics - and a lot of it's more fun, too! That's why every WEEKEND, here at THE ASTUTE BLOGGERS, we post some of the cultural things we're into, things we think you might also find entertaining, enriching, and stimulating. We just might turn you on to something cool.

After all, the arts - ALL ARTS, not just fine arts - are a big part of what our liberty is for, and what we're fighting to defend!
THIS WEEK: BABATUNDE OLATUNJI! 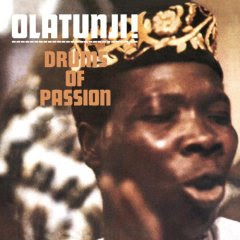 "Babatunde Olatunji was a virtuoso of West African percussion. His 1959 album "Drums of Passion" was a worldwide smash hit. He received a Grammy Award in 1991 for his collaboration with Grateful Dead drummer Mickey Hart on their Planet Drum album. He was also the founder of the Voices of Africa foundation."

LISTEN TO THE SAMPLES BELOW:

Editorial Reviews
Amazon.com
When he first appeared on the scene in America, Babatunde Olatunji was acclaimed by artists such as John Coltrane and Dizzy Gillespie; later, his influence was acknowledged by Carlos Santana and the Grateful Dead's Mickey Hart. As influential as this breakthrough record has been, it is delightfully unassuming, simply a straightforward excursion into the rhythms of Nigeria. "Akiwowo" is a joyful evocation of the rhythms that are created by a moving freight train. "Oya", "Jin-Go-Lo-Ba," and "Shango" all feature drumming of fiery intensity. Make no mistake, this recording is about rhythm and percussion, but don't overlook the fact that Olatunji has a distinctive and powerful voice. He uses it to fine effect on a number of pieces on Drums of Passion, at times soaring above the drums, then joining in harmony with others in his troupe. This is a rewarding album that truly deserves the decades of popularity it has enjoyed. --Jeff Grubb

LISTEN TO IT. BUY IT.

Posted by Reliapundit at 6:44 PM