The Palestinians have never missed an opportunity to miss an opportunity, and it looks like they’re gearing up to miss another one: PA official: We won’t come to conference without declaration. 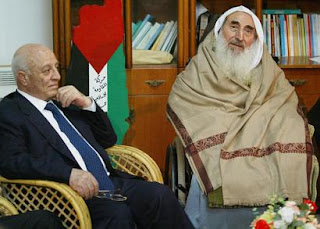 Ahmed Qureia, head of the Palestinian team to negotiate a peace agreement with Israel said on Saturday that there was no way Palestinians would attend the upcoming international peace conference unless a declaration of principles was formed.

Of course, all the Pali' posturing is bullshit. And Charles is right: it augurs not for success. But the reason the so-called "peace conference" - to be held in Annapolis starting on November 26 - will fail is not because of the posturing, but because of what lies beneath it: Palestinian "culture - the culture of Arafatistan, the culture of jihad.
Need proof? HERE: Israel proper is 20% Arab-Muslim - a percentage which is astounding when you think about it. And the Arab CITIZENS of Israel GET ALONG with their Jewish co-citizens just fine. SURE: polls show that MANY sympathize with the worst elements of Arafatistan's political ideologies, BUT THEY LARGELY GET ALONG WITH JEWISH ISRAELIS AND LIVE A MATERIALLY FINE LIVES WITH MORE RIGHTS THAN ANY OTHER ARABS ANYWHERE ON EARTH. This - and the "cold peace" Israel has with Egypt, Jordan and Turkey - makes many think that peace with the "Palestinian Arabs" is possible, too.

Because, the so-called Palestinian Arabs in Gaza and the so-called West Bank - not only can't get along with Israelis, they cannot stop themselves from killing EACH OTHER.
If they can't stop from killing each other, then Israel can't make peace them either.

These filthy jihadist animals of Gaza and the West Bank kill each other everyday and are teaching their children to commit genocide. Israel shouldn't be expected to make peace with this scum. REPEAT: The scum in Hamas and Fatah would no more keep an agreement with Israel than keep one with each other - which is to say they cannot keep a deal.

Israel should not negotiate a deal with people who cannot keep one.

AND IT'S NOT JUST POLITICAL IDEOLOGY WHICH PREVENTS A REAL PEACE; IT'S PALESTINIAN CULTURE: Any culture which condones parents killing their OWN daughters to restore their FAMILY'S tribal honor cannot be trusted to keep peace with a non-Muslims from tribe they hate.
Just as we cannot negotiate with al Qaeda, Israel cannot negotiate with Fatah or Hamas.

Until jihadism is erased from the face of the Earth there will be no peace. Peace is the result of victory, not compromising with evil enemies.
Posted by Reliapundit at 7:52 PM

The Palestinians have yet to honor a peace agreement. Most of them were dishonored before the ink was even dry by a suicide bomb that killed Israeli children. Why would anyone think they would have any honor now?

it's just that it needs repeating.

until pussy "religion of peace" libs like bush and condi "get it."