More on the Muslim/Communist alliance emerges as Chavez, ever willing to allow the people of Venezuela bear the brunt of his far left cause, commits the country to a possible loss of $3.7 billion per year. 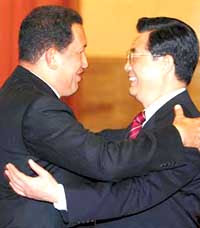 So much does Chavez despise the U.S. that he is negotiating a deal to export oil to China (with a shipping time of 30 days) rather than ship it to the U.S. which takes only five or six days. The cost of the oil will have to be slashed considerably to offset the cost of the shipping, which could result in a loss of $5 to $10 million per day.

“From the Chinese perspective, they see a man in Venezuela who hates the U.S. and is willing to do things that don’t make economic sense,” says Jim Williams, who heads the London, Arkansas-based WTRG oil consultancy firm. “So, they think, why not take advantage of this situation.”

Why indeed? The Chinese are nothing if not opportunistic and stand to profit quite handsomely from the hate-blinded actions of this madman. The little network of America hating buddies stands now at Ahmadinejad, Putin and Chavez bringing into the partnership ambitious neo-capitalist/Communist China (which links in Burma and North Korea) and now it looks as though Ahmi is courting other Latin American countries.
Via Spanish Pundit.

Chavez is working on converting his indigenous people to Islam.
Chavez drives out oil giants.

Cross-posted here
Posted by Aurora at 8:30 AM