ANOTHER TEAM OF RIVALS: WHAT THE NEXT WHITE HOUSE WILL PROBABLY LOOK LIKE

Not bad. The top two you can flip.

This is equally likely: 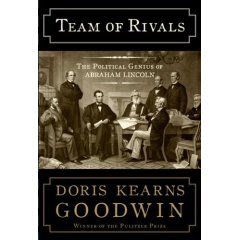 BTW: President Abe Lincoln had all his POTUS rivals in his cabinet. He was a Republican. Big men can do that.

If the crooked Hillary wins, then here's the way her White House will likely look:

I have problems with each and every GOP candidate, but would vote for any one of them if they were running against a Dem. Even McCain.

Maybe that's why I like to imagine that they'd work together after January 2009. They each have a lot to offer; not one has it all.
Posted by Reliapundit at 8:38 PM