ADVOCATING SHARIA IS AN ACT OF SEDITION 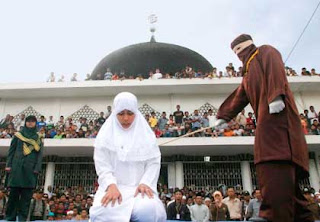 "I want the Sharia law imposed in my country"

Those words are spoken by a Muslim woman, apparently a student of George Washington University, in this Incorrect U video (the top one) of GWU Islamo-Fascism Awareness Week festivities. It's at right about the five-minute mark.

Maybe she doesn't mean the United States. Hard to say. But she may.

"Imposed." Not "voted in," or even "instituted." "Imposed." The forcible subjugation as inferiors of women and religious minorities. "Imposed." An Islamic supremacist system that denies the freedom of conscience, stones adulterers, and amputates the hands of thieves.

Well, at least she's honest about it.

WE SHOULDN'T WAIT FOR THE JIHADISTS TO MAKE A KINETIC ATTACK BEFORE WE COUNTER-ATTACK.

WE MUST ELIMINATE THEM BEFORE THEY MAKE KINETIC ATTACKS DESIGNED TO INTIMIDATE US INTO SUBMISSION.

PROSECUTING JIHADISTS FOR SEDITION IS PERHAPS ONE WAY TO DO THAT HERE AT HOME.
Posted by Reliapundit at 1:56 PM

Very thought-provoking post. In that vein, consider John David Lewis' No Substitute for Victory at The Objective Standard.

Mr. Reliapundit, my family couldn't agree with you more. Imposition is an action word, and at its most benign implies force, whether by violence, extortion, incitement, or coercion. Thank you for focusing on the shameless anti-Americanism of these terrorist supporters, and the liberals who enable them. No thanks at all to the elected cowards who refuse to stand up for America and the rule of law.

You got that right.

The Christian leaders also asked Muslims to forgive Christians for their past sins, including the Crusades and the present excesses in the “war on terror”,