HOW DOES IT HELP ISRAEL IF WE LET THE TURKS BLACKMAIL US INTO NOT BEING HONEST ABOUT THE GENOCIDE OF ARMENIANS?

The ADL caused such a scandal this past week by balking at proper recognition of Turkey's genocide of millions of Armenians in 1915 that it was forced to reverse its position.

But it also led to some very eyebrow raising discoveries about what kind of positions various other Jewish organizations may have on the issue, now being discussed by the Jewish Exponent: 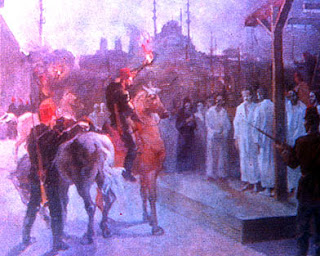 The Anti-Defamation League's reversal last week of its position on the Armenian genocide has set off a flurry of diplomatic activity in Turkey and Israel.

Officials in Ankara and Jerusalem, in coordination with American Jewish leaders, were working this week to contain the fallout from the ADL's statement, which recognized the World War I massacres of Armenians by Ottoman Turks as "tantamount to genocide."

The ADL was forced to reverse its longstanding position -- shared by other major American Jewish organizations -- of neutrality on the genocide question amid growing dissension within its own ranks.

Jewish leaders warned that recognizing the genocide, as Congress is now considering, could undermine American strategic interests in the Middle East, and Turkey's robust military and economic partnership with Israel. Also deemed at risk was the security of Turkish Jewry, which sent a letter earlier this year opposing a congressional resolution on the matter.

If Turkey refuses to admit their guilt, then all they're doing is implying that they're still an enemy country that shows no sorrow for its past acts of evil (and it should be noted that even Arabs and Kurdish Muslims were involved in the genocide, not only Turks). At the same time, it's bad for Jews and many other nationalities if they can't be honest and open about important historical events.

The ADL's initial refusal to take a full-fledged stand led to a fallout with the Armenian community too:

Though Jewish groups have toed a careful line on the genocide question for years, the issue exploded last month after the town council of Watertown, Mass. -- home to one of the country's largest Armenian communities -- voted to sever ties with an ADL anti-bigotry program in protest of the organization's refusal to acknowledge the genocide.

After the vote, the ADL's regional director in Boston, Andrew Tarsy, switched gears and condemned his organization's position. Tarsy was promptly fired by Foxman.

The Boston ADL leadership rebelled, and with pressure mounting, Foxman reversed himself last week, acknowledging that the "consequences" of Ottoman massacres of Armenians were "tantamount to genocide." Tarsy was reinstated Monday as Boston director.

Foxman, if you ask me, is a big problem, as IMO, he's a pretty jelly-spined chairman, and isn't it time he left his post already? I think so.

The subject has been in discussion in Israel too recently. Likud MK Ruvy Rivlin spoke about it earlier this week in a new daily paper called Yisrael HaYom, and is in favor of recognizing it. It should be fully recognized here, as it would help in making a case for the Jewish cause as well. And the US Congress should certainly recognize it too, and there should be major memorials founded in the US for it as well.

The Turks aren't the only ones who deny involvement in major crimes - the Arabs continue to deny their own involvement in the Jewish Holocaust, particularly Haj-Amin el-Husseini, the chief leader of the palestinian Arabs at the time.

(It should also be said that the Ottoman empire over the centuries treated the Jews in Israel more fairly and kindly than the local Arab Muslims did.)
Posted by Avi Green at 1:41 PM

You are being far too generous with the Ottomans.

After all, it would be hard for anyone to treat Jews worse than the Arabs did.

You've got a point, I should be aware of that at the same time.

You might be interested to know that the reason IBA got started is I wrote a post at CUANAS (Christians United Against the New Anti-Semitism) condemning Abe Foxman and the ADL for focusing on Christians, and skinheads, while generally ignoring the far larger Islamofascist threat.

In that post, I pointed out that all the ADL really does is do press releases. That's how they get most of their points across, and that's how they generate the most publicity. And, publicity is the biggest part of their business.

Then, I pointed out that that is exactly what blogs do, and really, it can be done for something quite less than the budget afforded to the ADL.

I used to send money to the ADL, and I never would again.

Anyway, in that post, I speculated about the possibility of starting a worldwide blog that published on the subject of anti-Semitism from the perspective of writers all over the world. This way, I thought, we could get far more coverage than ADL ever could, and we could do it for no money.
My friend J (a Jewish guy from the UK) wrote a comment:

And so, we did. The blog we started Infidel Bloggers Alliance ended up widening its purpose to become all about the counter-Jihad.

And, we have yet to get Foxman to shut up two and a half years later.

That's outrageous. Whitewashing and even so-called neutrality is tantamount to denial. They should know better, considering what they went through.

As a Turk I am dissapointed in some of the comments made in this blog...

I would expect some kind of fact finding before and an indepth look at views from both sides before making a judgement.

Try to find out who started the events of 1915-1923.. Who was the first to massacre whole villages in the name of freeing themselves from the Ottoman Empire. Who started a civil war while the country was at war already (WWI).

Further more, why pick on Turkey, if you consider the events of 1915-1923 genocide than you should also be fighting to have the US goverment that they have committed genocide on the American Indians, not to mention the Spanish on South America...

Why the selective blame ?

The Ottoman Empire is the only empire that managed to survive for centuries, one of the reasons behind this is the freedom it gave its citizens, including religous and language freedom. Key positions in the government and military were always assigned on merit, many Jews, Armenians, Christians held positions of power including running the military.

If the Ottoman Empire had been like any other empire of the time, most of the balcans and the middle east would today be speaking Turkish and not thier own language.

The Ottoman Empire and Turkey for that matter has always been a safe heaven when ever a population has been forced to flee its country, look at Jews from Europe in the last half century, Kurds from Iraq during Saddams reign (over 1 million were taken in to reffugee camps while we faced PKK terorst attacks from Kurds).

The only reason the events of 1915-1923 happened is a civil war started while the Ottoman Empire was under attach from all sides, basically the deportation was the result of back stabbing from the countries own citizens which resulted in a harsh survival instinct. Do not forget the first villages masacred (including old and children) were Turkish villages by Armenian rebels..

There can be no comparision to the German genocide where systematic killings of Jews took place, this is the main reason Turks are so furious about the label of genocide. Yes the events were tragic but not a planned systematic killing.