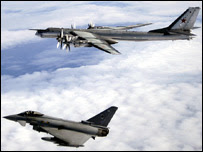 Eurobuddies Austria and Russia are slamming the U.S....again! Austrian Defense Minister Norbert Darabos is whining about the U.S. missile defense shield in Eastern Europe being 'provocative', while Putin "sees the initiative near its borders as a threat to its own security. On Tuesday Russia's military chief told the Czech Republic that hosting the shield would be a "big mistake".

Considering Putin's outrageous taunting of the U.K. by flying his bombers almost into U.K. airspace, along with a stint near a U.S. base in Guam, I don't think Washington is going to be letting down their guard any time soon. To Putin's claim that the U.S. is 'rekindling Cold War debates', Washington has responded:

"We view the Cold War as being over. Such comments are not helpful and we now face a new strategic environment that requires us to move beyond Cold War thinking," State Department spokesman Gonzalo Gallegos said.

"We've been open and transparent with all E.U. and NATO allies on this, and we'll continue to do so. We're discussing missile defense with the Russians," Gallegos said at a news briefing.

The United States plans to deploy elements of its shield -- designed to intercept and destroy missiles from "rogue states" like Iran and North Korea -- in Poland and the Czech Republic.

Putin is a snake, plain and simple. He's shown it with his Islamic nation partnerships. He's shown it in his taunting of the U.K. and his (suspected) killing of British citizens on U.K. soil. If the Eurabians have a problem with the U.S. being defensively ready, they can shove it where the sun don't shine.

Via Terresa at Noisy Room
Cross-posted here
Posted by Aurora at 9:02 AM