SUPPOSEDLY SCIENTIFIC "OUT OF BODY" EXPERIMENTS ARE TOTAL BS 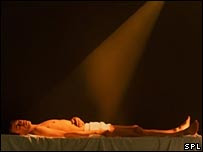 I SAY THIS IS BUNK.

Simple: their experiment would not work on a blind person. 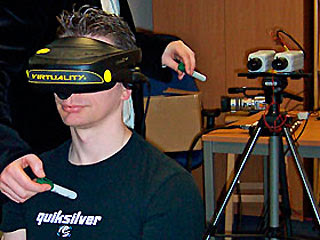 In that illusion, people hide one hand in their lap and look at a rubber hand set on a table in front of them. As a researcher strokes the real hand and the rubber hand simultaneously with a stick, people have the vivid sense that the rubber hand is their own.

When the rubber hand is whacked with a hammer, people wince and sometimes cry out.

The illusion shows that body parts can be separated from the whole body by manipulating a mismatch between touch and vision. That is, when a person’s brain sees the fake hand being stroked and feels the same sensation, the sense of being touched is misattributed to the fake.

The new experiments were designed to create a whole body illusion with similar manipulations.

We know that blind people have propriperception without sight; therefore we know that proprioperception is not dependent on sight.

The person experimented on merely located the sensation in a place which was not really his own body. He was fooled. That's all.

AND THE FOLKS WHO GAVE THESE CHARLATANS GRANT MONEY WERE FOOLED, TOO!
Posted by Reliapundit at 6:47 PM