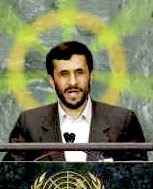 Who do you choose for the lead character in your new movie? A megalomanic madman who tortures, murders, denies the Holocaust and wishes to annihilate the nation of Israel. Ahmadinejad, who else? If you truly loathe your country, it's best to go for the big fish.

Filmmaker, Oliver Stone had been snuffling around Ahmadinejad for months, begging and groveling for the privilege of making a movie on him. The reply? Take a hike.

Ahmadinejad's earlier refusal was couched in insulting terms, when he called Stone a part of the "Great Satan," a term Iran has used to describe the U.S. since the 1979 Islamic Revolution.

Ahmadinejad's media adviser had said that while Stone may be a member of the "opposition" in the U.S., he's "still part of the Great Satan."

Ahmadinejad has a point there and it didn't escape Stone. "I've been called a lot of things, but never a 'Great Satan,'" the director said in a statement.

Obviously flattery got Ahmadinejad everywhere, as Stone ramped up his overtures, throwing in some Bush-bashing, and offering to 'help Iran improve its image' and finally, mutually flattered, the Iranian despot has now given Stone the OK.

Um, I thought the holiest of Islamists (and all that) weren't allowed to have themselves photographed (let alone to be the subject of a movie). Doesn't Ahmadinejad see himself as a key player in ushering in the Islamist Messiah? Shouldn't he be especially religious and devout?

Ahmadinejad also has urged Iranians to prepare for the coming of an Islamic messiah, the Mahdi, by turning the country into an advanced Islamic society and by avoiding the corruption and excesses of the West.

...some fear a nuclear-armed Islamic Republic could trigger the kind of global conflagration Ahmadinejad envisions will set the stage for the end of the world.

Oh what a great honor for Slimy Stone, to lick the boots of the one who will usher in the great Islamist Messiah and World War III. He's living the dream of every Leftist. Too bad he's going to wake to a living nightmare once his dream is realized.

EARLIER TAB POST HERE.
Posted by Aurora at 8:31 AM