LET'S ATTACK A SYMBOL OF ISLAMO-MISOGYNY: BAN THE BURQA

We can strike a blow against islamo-misogyny right here in the West; PIPES: 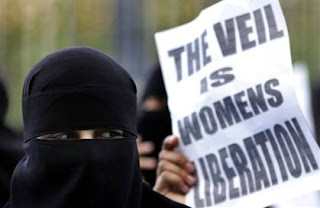 Once-exotic forms of Muslim women's head and body garments have now become both familiar in the West and the source of fractious political and legal disputes.

... The practice of covering the face derives from tribal customs that build on Islamic law, not the law itself.

For example, some tribeswomen in Saudi Arabia's Al-Kharj region put on the burqa at puberty, then never take it off – not for other women, not for their husbands, and not for their children. These family members typically see the woman's face only when viewing her corpse.

... Nothing in Islam requires turning females into shapeless, faceless zombies; good sense calls for modesty itself to be modest.

The time has come everywhere to ban from public places these hideous, unhealthy, socially divisive, terrorist-enabling, and criminal-friendly garments.

Pipes has details and links. RTWT.

I believe that the root cause of islamo-terrorism is islamo-misogyny: a people whose ideology teaches that woman must never be seen in public or have the freedom to dress as they please, and teaches its young men that it's okay (1) to beat their wiveS (PLURAL!), and (2) force their daughters to marry their cousins, and (3) kill their sisters for "dishonoring" their family, will of teach these same young men that it is okay to commit genocidal terror against infidels.

We need to begin to go on the offensive against islamo-misigyny. Banning these sexist garments would be a start.

We must make Muslim women feel free and safe enough to dress as they please, and to marry who and when they please.
Posted by Reliapundit at 11:25 PM

I’m just thinking.
When the take a photo of a group at an affair such as a wedding etc, how do you know who the hell is who when the women are all wearing these orr...face derives?