POET and novelist Owen Sheers is to make his debut at the BBC Proms.

The critically-acclaimed young writer has joined forces with Oscar-winning composer Rachel Portman to pen a musical drama about climate change.

The Water Diviner’s Tale, which is inspired by Hurricane Katrina, features a chorus of 40 children and will be premiered at the Royal Albert Hall.

ASIDE FROM THE FACT THAT KATRINA HAD NOTHING TO DO WITH CLIMATE CHANGE, THIS ARTICLE NEEDS NO ADDITIONAL COMMENT.

HERE IS THE BBC PROMO FOR IT:

Following the success of The Little Prince on BBC TWO and in concert, film composer Rachel Portman and poet/novelist Owen Sheers have created a new 'dramatic musical piece for all ages' on the subject of climate change – a BBC commission in which professional singers perform alongside massed youth choirs and a 40-strong children's ensemble specially chosen in collaboration with the BBC's New Talent scheme.

THIS "DRAMATIC MUSICAL PIECE" RESIDES IN THE SAME LOONY LEFT REALM AS: 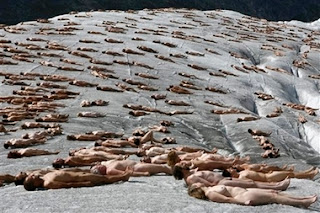 I PREDICT IT'S AS ENTERTAINING AS NIXON IN CHINA. WHICH IS TO SAY IT'S PROBABLY AWFUL.

QUESTION: IS THERE NO END TO LEFTIST PROPAGANDA EFFORTS IN THE ARTS AND MEDIA!?