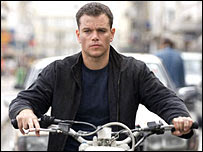 Matt Damon in The Bourne Ultimatum Hollywood star Matt Damon has dismissed James Bond as being stuck in the past.

The actor, who appears in the Bourne thrillers, said: "The Bond character will always be anchored in the 1960s and in the values of the 1960s."

The suave spy was "so anachronistic when you put it in the world we live in today", he said, but added that Bourne was no better or worse than Bond.

Damon was speaking in London, where The Bourne Ultimatum, the third film in the franchise, was having its UK premiere.

"Bond is an imperialist and a misogynist who kills people and laughs about it, and drinks Martinis and cracks jokes," he told reporters.

Damon is a good actor who is a dupe of left-wing anti-American BS.
America is not nor was ever an imperialist nation.

Those who argue we were ignore history.

We liberated half the world.

And we get a lot of grief for it.

From jerks like Damon.
Posted by Reliapundit at 6:33 PM