FREDDY THIELEMANS, YOU MADE A BIG MISTAKE 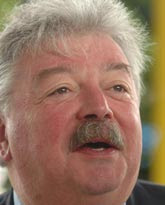 Freddy Thielemans you have made a huge mistake by banning the anti-sharia demonstration in Brussels set for this September 11th.

There's a palpable excitement in the fight that is coming as many Europeans, tired of being suppressed by an ever-burgeoning state, are going to 'show' you, Freddy that they won't be shoved aside so easily.

You've probably doubled or tripled the number of people who going to come because your totalitarian ban.
Your background is freely available to everyone interested.

*Leader of the Socialist Party in Brussels.

*23% of the city council are Muslims

*Freddy Thielemans has approved all demonstrations in Brussels within the last 5 years, also Muslim demonstrations. Only 5 have been prohibited and these were all terror organisations.

*According to many concerned citizens within Brussels, is it only a matter of time before Muslims can take over the city council.

*In 2005 on the day of Pope Johannes Paul’s death, Freddy was eating in a restaurant. At the same time he got the sms message, he jumped up and declared:

The pope is dead, champagne for all!

And so it goes again with the marriage of the mad left and the Islamists! Clearly, Freddy Thielemans, you owe big time to the powerful Muslims on your council and in your constituency and you are never going to do the right thing, but that is irrelevant to those who are planning to oppose you whether you like it or not.

This is how it's going to be, Freddy. First, you're going to be challenged in court. This is not going to be some little two-bit, easily kicked about citizen who' s doing this. They have numbers and influence behind them.

On Friday, Hugo Coveliers, a member of the Belgian Senate, was set to "initiate an appeal procedure on Ulfkotte’s behalf against the mayor’s decision before the Council of State, Belgium’s highest administrative court. The CoS will have to issue its verdict before 11 September. According to Senator Coveliers it is “80% certain” that the CoS will overrule the mayor’s ban and allow the demonstration to go ahead".

"Senator Coveliers is one of Belgium’s best lawyers. He has been a member of the Belgian Parliament (first the House of Representatives, then the Senate) since 1985. He was the group leader of Prime Minister Guy Verhofstadt’s governing Liberal Party in the Senate, but was ousted from his party in 2005 because he criticized its multiculturalist policies and the decision to grant voting rights to non-Belgians.

During his visit to Brussels today Udo Ulfkotte gave interviews to some of the major Belgian newspapers. He also met Filip Dewinter, Belgium’s “worst Islamophobe.”

Dr Ulfkotte expects that thousands of Europeans, from all of the 27 EU countries, will come to Brussels on Tuesday 11 September to support the demonstration’s demand: No Sharia here. “Europeans want to keep their liberties,” he told me today."

And what if they lose in court?

“In that case we still ask people to come to Brussels, where we will stage a ‘birthday party’ for Mr Thielemans and everyone else who happens to be born on 11 September.

I have been told that there are many Belgians born on that day: Freddy Thielemans, Filip Dewinter, one of your ministers [the leftist multiculturalist Flemish minister of Culture Bert Anciaux] and even your Queen Paola.

So, whether the demonstration is allowed or not, we ask people to come to the Schuman Square (Rond-Point Schuman), in front of the Berlaymont building, the headquarters of the European Commission, at noon (12 am). What we will do anyhow, whether permitted or not, is to hold one minute of silence for the victims of 9/11/2001.”

So, you see Mr Thielemans, it looks as though your ban is backfiring big time. But look at the bright side; you're probably going to have a lot more people celebrating your 9/11 birthday than you've ever had in your life.
SOURCE