Pilgrims celebrating the Hindu month of Shravan (mid-July to mid-August) are filling the pockets of marijuana sellers in the Deoghar district of Jharkand, according to a report in the News Post of India. Considered auspicious by followers of Lord Shiva, the month is marked by, among other things, a pilgrimage by millions of adherents to pour water on the Shiva Linga at the Baidyanath temple in Deoghar.

The pilgrims, clad in saffron, smoke marijuana (ganja) as part of the observance. According to one estimate cited by the News and Post, devotees are buying and smoking 50 to 65 pounds of marijuana a day from happy Deoghhar pot vendors.

I think the Shiva Linga deserves some explanation. It is the male sex organ.

Now why would pot and the male sex organ be combined in celebration? I think it is folk wisdom. I wrote an article a while back, Better than Viagra, about the helpful properties of marijuana when it comes to sex.

It is possible the Hindus are on to something. It is possible they have been on to it for a very long time. It is my estimation that when the boomers figure this out in a big way the drug war will be over. It is hard to stand between a man and sex. Heck the ladies would be quite supportive as well.

Cross Posted at Power and Control and at Classical Values 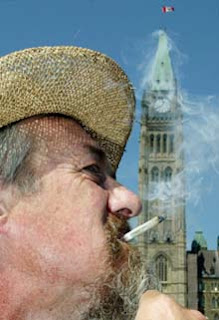 Reliapundit adds: Sheesh MS, maybe it's time you moved to India; you could even become a Hindu!

BTW: what exactly does this have to do with combating leftism?

I put this issue way below immigration and abortion and pollution and taxes. AND WAY WAY BELOW WW4.

But thanks for your views. THEY'RE ALWAYS ENTERTAINING!

i know you contend the drug prohibition laws don't work, and that therefore we should legalize drugs.