DO WE REALLY NEED 'UNITY' TO WIN THIS WAR?

Apparently, there is a widespread opinion that the American people need "unity" in order to win the "long war" against the Islamofascist terrorists.
In a recent column, Stu Bykofsky wrote in the Philadelphia Daily News that "To save America, we need another 9/11."

He is concerned because:

Iraq has fractured the U.S. into jigsaw pieces of competing interests that encourage our enemies. We are deeply divided and division is weakness.

He is afraid that:

America's fabric is pulling apart like a cheap sweater.

And he thinks that another major attack on the homeland would put us back together:

What would sew us back together?

Is there any doubt they are planning to hit us again?

If it is to be, then let it be. It will take another attack on the homeland to quell the chattering of chipmunks and to restore America's righteous rage and singular purpose to prevail.

The unity brought by such an attack sadly won't last forever.

Mr. Bykofsky is wrong on many counts.

First of all, another major terrorist attack will not pull this country together. As Mark Steyn noted in the Corner:

The angry left will be demanding by lunchtime "What did Bush know and when did he know it?" and citing eminent scientists such as Professor Rosie O'Donnell to demonstrate that it couldn't possibly have been anything but an inside job. The less angry left will demand not a punitive military response but a 12-month blue-ribbon commission co-chaired by Lee Hamilton to call witnesses and investigate where the Administration went wrong. Less motivated types will be convinced - like British public opinion after the Glasgow attack and the sailor kidnappings - that it's blowback for Iraq. And a big chunk of the rest may even plump for the Spanish option post-Madrid: Oh, dear, we seem to have caught your eye. What would it take for that not to happen again?

The split in this country is real. The so-called "singular purpose" of Fall 2001 was mostly illusory. Lightning won't strike twice, even if the Halliburton Tsunami-Hurricane Machine wants it to.

More importantly, however, is the fact that "unity" is not necessary for victory. Americans have NEVER been "united" during ANY of our Wars, and disunity never prevented us from winning.

Let's look at the record.

In fact, the "British Legion" commanded by Banastre Tarleton, a light cavalry unit responsible for some of the worst atrocities during the War, was composed not of Hessian mercenaries or English line troops, but American loyalists. A majority of Americans probably supported the Revolution, but the population was hardly "united" against the Crown.

The War of 1812 had many opponents. Thirty-four of the 36 Federalists in the House of Representatives signed a document claiming that the war was anti-democratic, hostile to representative government, and unjustified. (Sound familiar?) Moreover:

While a sense of patriotism made initial support for the war, outside of Federalist strongholds, very strong, as the war dragged on and the U.S. suffered several reversals, opposition to the war beyond Federalist Party legislators grew. As a result few could be found willing to actually join the military and fight the war. (Emphasis added.)

The United States could barely recruit an army sufficient to defend the country from the British:

This was shown in national recruitment efforts as well. While Congress authorized the War Department to recruit 50,000 one-year volunteers, only 10,000 could be found, and the Army never reached half of its authorized strength. A national conscription plan was proposed in Congress, but defeated with the aid of Daniel Webster, though several states passed conscription policies. Even Kentucky, home state of the best-known war hawk Henry Clay, was the source of only 400 recruits in 1812. 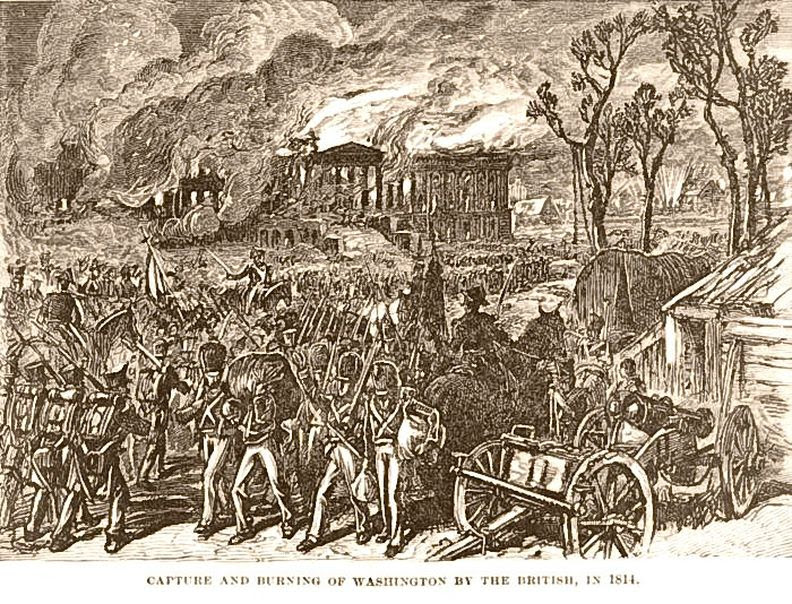 And the results are well known: Washington burned, and many American civilians victimized by a British campaign of terror. On the other hand, Great Britain had to recognize the United States as a power in its own right, the Federalist Part collapsed, and Jackson's victory at New Orleans brought about a renewal of patriotic feeling.

Moving right along. Remember the Mexican War? The Whigs bitterly opposed it. Robert Tombs of Georgia proclaimed: "We charge the President with usurping the war-making power... with seizing a country... which had been for centuries, and was then in the possession of the Mexicans." Whig Representative Abraham Lincoln also vehemently opposed the war. And Henry David Thoreau retreated to a cabin on Walden Pond after refusing to pay taxes that would support the war effort. Despite that opposition, the United States won the war.

The War Between the States, which you Yankees call "The Civil War," obviously split the country in two. But what you should never forget is that the war was unpopular even in the North and that the Copperheads and Democrats continued to agitate against it right through the electoral campaign of 1864. General George B. McClellan, running as a Democrat, on a party platform that called for pusillanimous surrender to the Confederacy, garnered 45% of the popular vote -- against Abraham Lincoln. It was the same game, then as now, but even worse. Treasonous Copperhead Democrats met with enemy leaders; draft-dodgers fled to Canada; riots against the war and the draft broke out in New York and other northern cities. As the war dragged on year after year, it became more and more unpopular with large segments of a weary populace. GatewayPundit has a series of posts on similarities between the Vallandigham-Dodd gang of Copperheads and the Pelosi-Reid gang of traitors here, here, here, here, here, and here.

Enough said. Despite the Copperheads, the United States won that one.

Next up, the Spanish-American War. It was vigorously opposed by a gaggle of "anti-imperialists" that included Mark Twain. We won, anyway. 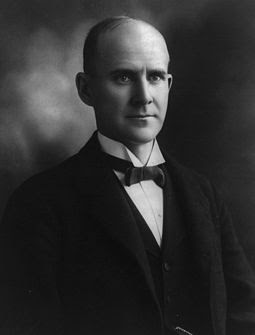 The "Great War," the First World War, was opposed by socialists and pacifists. Socialist Presidential contender Eugene Victor Debs made a speech which was found to have had the effect of obstructing the draft, and he was convicted under the Espionage Act and sentenced to 10 years in the Federal penitentiary (President Harding commuted his sentence to time served in 1921). Despite that opposition, we won WWI.
The Second World War enjoyed widespread support in the United States -- after Pearl Harbor, and after Hitler invaded Russia. Until that point, isolationists and communists opposed American involvement. Enthusiasts for national-socialism like Charles Lindbergh made common cause with enthusiasts for communist socialism, and advocated peace. When Roosevelt went in on the same side as Stalin, however, Hollywood, the academy, and the press became the war's solid supporters. Don't forget, though, that Japanese citizens, Japanese-Americans, as well as German and Italian nationals, were interned for the duration.

That takes us up to the Korean War. Think everybody supported it? The Korean War was so unpopular, that Harry S Truman's popularity dipped into the low 20's, and he decided not to run for re-election. Dwight Eisenhower was elected as a peace candidate, promising to bring the war to an end (which he did, but without cutting and running: the United States still maintains a key defensive position in South Korea today!) The communists were unable to mount much of an anti-war movement within the United States, however, for two reasons: (1) the Korean War was fought under the aegis of the United Nations, and (2) the communists were too busy laying low and defending themselves from the scrutiny of the House Un-American Activities Committee and Senator Joseph McCarthy.

And we won the Korean War. South Korea is still free. Once even more impoverished than North Korea, South Korea is an economic and political success.

Opposition to the Vietnam war was widespread. A vast propaganda war orchestrated by the KGB denounced America for supposed war crimes, and communist-inspired and communist-led front groups agitated for American surrender and withdrawal from the very beginnings of the war in 1962 and 1963. In a pattern that should be familiar by now, as the war dragged on, despite American successes, segments of the American public became disenchanted and were won over to the side of appeasement and surrender.

Nevertheless, Americans defeated the communists in the field, and the Republic of South Vietnam was able to hold on and defend itself for two years after the withdrawal of the last American combat forces in 1973. South Vietnam didn't fall until the Democrats in Congress took advantage of the Watergate scandal to deny all war funding to the Vietnamese government.

I hope those brief historical capsules support my thesis.

Americans have NEVER been "united" in ANY of the wars that we have fought to defend our Country, our freedoms, and our way of life.

Nevertheless, Americans won EVERY one of those wars.

We can WIN this war, too. We don't need 100% unity to do it. What we need is an educated, wide-awake, committed majority who can hold on despite the depredations of the enemy and the blandishments and treacheries of the "nattering nabobs of negativism" who want to see our great nation enthalled to a foreign ideology (-- just which foreign ideology, they don't much care: socialism, communism, or Islamism -- anything will do in order to defeat America.)

Patriotic Americans are sufficiently united today to win this war, and any other that needs to be won. We will not let the enemies boring from within undo the achievements of our armies in the field.

And may God continue to bless them with victory and safety!
Posted by Punditarian at 11:02 AM

But I think there is a cautionary note which must get equal time:

we're on a path to win WW4 as long as the "anti-war" side doesn't get control of the WH.

(And that would've meant that the North would've capitulated to the South.)

Which is why I have long argued that to defeat the jihadist enemy abroad, we must defeat the Leftists enemy at home.

So... while we don;t need and therefore shouldn't ever expect "UNITY", defeating the Dems/Left - preventing them from getting MORE control over US foreign policy and anti-terror policy - IS ABSOLUTELY ESSENTIAL.

You folks have not figured out that the dems and reps are the same.
As long as you want conscription, you will never have unity.
Would you be willing to spread the word about about www.draftresistance.org? It's a site dedicated to shattering the myths surrounding the selective slavery system and building mass civil disobedience to stop the draft before it starts!

Our banner on a website, printing and posting the anti-draft flyer or just telling friends would help.

PS. When it comes to conscription, an ounce of prevention is worth a pound of cure!