THE CHIC DEGENERATI OF HOLLYWOOD ARE ATTACKING OUR TROOPS

The film's title refers to how, according to De Palma, mainstream American newspapers and television channels are failing to tell the true story of the war by keeping the most graphic images of the conflict away from public opinion.

... "Redacted", by U.S. director Brian De Palma, is one of at least eight American films on the war in Iraq due for release in the next few months and the first of two movies on the conflict screening in Venice's main competition. 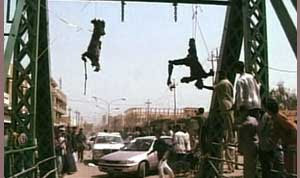 THE "ANTI-WAR" MOVIE CONTAINS NO IMAGES OF BERG OR PEARL OR THE OTHER COUNTLESS AMERICANA AND IRAQIS TORTURED AND KILLED BY THE JIHADISTS.
I WONDER WHY?

When you hold one set of standards for the USA and another one - much lower - for the enemy, then you are being biased - in fact ANT-AMERICAN.

We deplore the RARE war crimes committed by the few US troops who "lose it." They should be punished. They have been.

But we deplore EVEN MORE the misdirected rage of those who brandish these crimes and ignore the enemy's routine - NAY DOCTRINAL use of terror.

An enemy which kills and cooks children and forces parents to eat them.

For making this movie, De Palma is a traitorous piece of crap.

He and his whole chic degenerati Hollywood crowd - like Oliver Stone and Tim Robbins and Sean Penn, and their producers - are traitors. Lower than scum. As evil as the enemy. Though they do no jihadoterror themselves they certainly facilitate jihadoterror's message.

THEY ARE IN EFFECT THE MINISTRY OF PROPAGANDA FOR THE ENEMY.

And in this they are no different than most of the MSM and the Democrat Party.

To the Left and in this film, I'm sure: