An extraordinary battle has been raging between an Islamist billionaire, Khalid Bin Mahfouz, and one female writer, Dr Ehrenfeld. 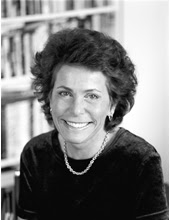 Dr Ehrenfeld has written a book Funding Evil which, amongst other things exposes the activities of Khalid Bin Mahfouz. Mahfouz, who has sued or threatened to sue some 36 U.S. and U.K. publishers and authors, just can't get no satisfaction with Dr Ehrenfeld.

He thought he had achieved success when a British court ruled in his favour against Ehrenfeld:

"...Bin Mahfouz sued Ehrenfeld for libel in Britain. In the High Court, bin Mahfouz’ attorneys informed Justice David Eady that former CIA director R. James Woolsey had written the foreword for Funding Evil. “Say no more,” declared Eady. “I award you a judgment by default, and if you want, an injunction, too.”

Justice Eady then ordered Ehrenfeld to apologize, retract, pay bin Mahfouz $225,913.37 in damages and destroy copies of her book."

The idiotic and traitorous dhimmitude of the high level British judge had no authority over Ehrenfeld however. As an American citizen, she went to American courts and claimed her constitutional rights. The American courts backed her up so she defied the judgement of Eady and Bin Mahfouz was foiled.
This is an exceptional story which highlights a major victory over dhimmitude and Islamist attempts to subdue the West. It shows how evil many of the high level people in the British legal system and also, the fact that America is still alive and kicking despite the best efforts of the Left!

I would recommend that you read the rest of this amazing story at Yankee Doodle's blog.
Cross-posted here
Posted by Aurora at 10:07 PM