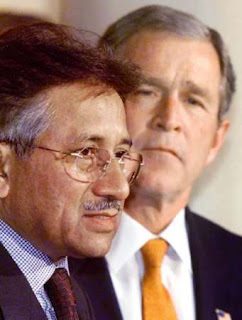 In North Waziristan, the wild border land that America hopes will be Osama Bin Laden’s graveyard, the normally busy roads are almost deserted and the fear is pervasive. Army helicopters sweep the valleys at night hunting for Al-Qaeda militants as troops and gunmen exchange artillery and rocket fire.

America and Britain regard this usually autonomous tribal area - where Bin Laden is long believed to have been hiding - as the logistics centre of Islamic terrorist attacks around the world. 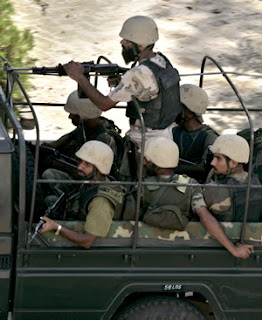 President Pervez Musharraf sees it as the centre of a campaign to “Talibanise” Pakistan. Spurred on by Washington, he has abandoned a truce with Waziristan’s Islamist guerrillas and ordered his army to root them out.

There are believed to be about 8,000 gunmen – a mix of foreign Al-Qaeda volunteers, Afghan Taliban, Pakistani Islamists and local Waziris whose families have for centuries fought off any attempt to impose outside rule on this area. In modern times, even map-makers have been shot to hide the region’s mysteries from the outside world.

Last week soldiers sealed all the roads into Miran Shah, the provincial capital, occupied the hills around it and fired the first artillery salvo in what Musharraf’s many critics have called a war on his own people.

The London Telegraph reports that Pervez Musharraf has reached an accommodation with moderate opposition figure Benazir Bhutto that will kick-start Pakistan's dormant democracy. While the final arrangements remain in limbo, especially the choice of Prime Minister, it promises to further marginalize the radical Islamists if successful:

Under the reported agreement, struck late on Friday night, Gen Musharraf would step down as commander in chief of the country’s armed forces but would be able to retain the presidency.

Mrs Bhutto would be permitted to return to the country to stand in parliamentary elections, and the constitution would be changed to allow her to become prime minister for a third term.

The "present crisis of religious militancy" has forced the hand of Musharraf. A supporter of the Taliban during his first years in power, 9/11 forced Musharraf to reverse his earlier alliances. That has led to various short truces, notoriously in Waziristan over the past two years. However, the Red Mosque standoffs show that Musharraf has gained nothing from his attempts to rekindle his political alliances with the jihadis. 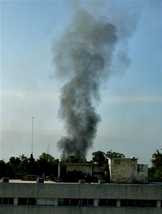 I DISAGREE WITH THE CAPTAIN: Musharraf was UNAMBIGUOUS in his assault on the Red Mosque. He quickly dispatched 12,000 troops to the Tribal Areas. And now he is making a deal with Bhutto.

IMHO : THESE ARE RELATED DEVELOPMENTS
I think this all adds up to one thing: The Pakistan ruling class FINALLY realizes that they are in an existential war, and they are finally pulling out all the stops.

I feel that Musharraf probably knows where Zawahiri is, (stuck in the fly-paper of southern Waziristan or northern Balochistan), and that he would not start down this path unless he felt he could get him - (and UBL, IF he is still alive, which I DOUBT he is!) - and kill Zawahiri and a few thousnad al Qaedas while he's at it.

And all this will probably come to a head just BEFORE Petraeus's report.


WHAT WILL THE DEMS AND THE MSM DO WHEN IT BECOMES INESCAPABLY OBVIOUS THAT WE ARE WINNING IN IRAQ AND HAVE ALSO DEALT A DEATH BLOW TO AL QAEDA IN AFGHANISTAN?

They will do what they always do: LIE.
Posted by Reliapundit at 10:21 PM